IT’S amazing, the people you bump into in a hotel elevator.

The Edinburgh-based newspaper designer, Ally Palmer – part of the Palmer Watson partnership – was in Moscow last week, speaking at a conference organised by the publishers of Russia Beyond the Headlines – an English language supplement distributed via several well-known newspapers, including The New York Times, The Wall Street Journal, El Pais and The Daily Telegraph..

And he was making his way to his hotel room, who should he bump into bump Roman Abramovich, who the previous evening had seen the football club he owns, Chelsea, lift the Europa League Cup, following a 2-1 victory over Portugal’s Benfica. 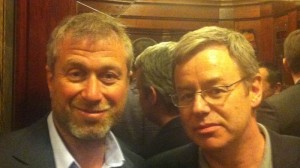 While there was time for a pic to be taken, the Russian oligarch was already on his way before Palmer could pipe up: “Fancy buying Ayr United”?

Staying with football. Earlier this week, the men’s Scottish Premier League agreed not to dock points off Heart of Midlothian FC, because of the financial difficulties of their parent company, which – had they done so – would have relegated the club into the Scottish Football League First Division.

But some Hearts fans will have been first thrown into a panic by a fake twitter account that looked like it belonged to STV news, but contained underscores to suggest it might not be.

Not everyone was so wise as to notice the warning signs.

And it will have been those on the receiving end of re-tweets who will have been most concerned. Said the fake account, the club had been docked a whopping 25 points and were down.

ONE of the several recent TV tributes to Aberdeen FC’s European Cup-Winners’ Cup triumph, 30 years ago, featured the players enjoying the acclaim of supporters at the club’s Pittodrie stadium.

Except that – as the more sharp-eyed viewers will have noted – not all the shots were of the parading of the European silverware, won in Gothenburg, Sweden, on May 11 1983.

Some were of the Scottish Cup, won ten days later.

NOT quite a barcode triangle in the North-east, but certainly a couple of print problems in that part of the world, with the Mearns Leader newspaper and its Kincardineshire Observer edition both carrying an incorrect pricing barcode this week, to cause no doubt a tad confusion among readers and newsagents.

And yesterday, not a million miles away, The Press & Journal was carrying an apology for “intermittent disruption” to the distribution of the paper, meaning “”some of you [readers] in one or two edition areas have not had the service you deserve from us when trying to get hold of a copy of your P&J over the past couple of weeks”.

SHE was hobbling (on crutches) in obvious discomfort and she was attending the Scottish Student Journalism Awards last night to perform a solemn duty, to award a prize named after her journalist son, who had died five years ago, of cancer, aged just 32.

But Jackie Macdonald was not only gracious but could see the funny side as to why journalists were anxious to speak to her: earlier that day, she had been mobbed by a herd (if that’s the collective noun) of llamas.

It happened at Blair Drummond Safari Park, as she was helping her grand-daughter be a ‘zoo keeper’ for the afternoon, as a gift.

Calum Macdonald began his career at the Lennox Herald, before moving on to the Stirling Observer, followed by the Evening Times, the Daily Record and The Herald.

He was, according to Herald editor, Magnus Llewellin, blessed with curiosity, courage, ‘rat-like cunning’ and charm, a friend and an exceptional journalist who often ‘outscooped’ his fellow journalists, getting the interviews others wished they had.

Winning the prize that bears his name, for investigative journalism, was a team of final-year BA Multimedia Journalism students at Glasgow Caledonian University.

ANYTHING tickling your tastebuds? Email here.[/private]

« Broadsheet switch to compact for Stornoway Gazette
In My Opinion: James Aitken: Time for a Scotland-wide Channel 3 licence »