FIRST Minister, Alex Salmond’s love of a novel by Scots author, William McIlvanney, was, he is reported as saying, the reason he didn’t get a job at the BBC.

And why, writes Brian Ferguson, in The Scotsman, a career in politics beckoned, instead.

Ferguson quotes Salmond, as saying: “When I left university I applied for a job at the BBC, in 1978. When I went for the interview, they asked me what my favourite book was. I said ‘Laidlaw’ because I had just read it. I realised immediately I had said the wrong thing. It was not impressing them at all.

“One of the panel had never even heard of it. Another one asked me what it was about and when I said it was a crime novel about a Glasgow detective, he said, ‘Oh really?’

“I was totally thrown by their attitude and spent the next hour telling them it was the greatest book that had ever been written and to stuff their job.”

STAYING with Salmond and he yesterday must have set a few pulses racing among the media, when asked to comment on allegations that an email account has been hacked into at the pro-Scots independence Yes campaign.

He told STV News: “What I would say is this: If it turns out, and of course it’s still to be determined, that a newspaper has been involved in some way, given everything that’s happened over the last few years with illegal hacking and the whole scandal that erupted from that; if that turns out to be the case then it would be a very, very serious matter indeed.”

Wrote Auslan Cramb, in the Daily Telegraph, earlier: “The [campaign] was advised by police to call in BT after it received a media inquiry last week that appeared to be based on private correspondence.”

No indication yet who made the inquiry.

PROBABLY not a Saltire in sight. Ahead of the England v Scotland men’s friendly international football match last week, teams representing the English and Scots media locked horns under the shadow of Wembley.

Scorer of the winning goal was the Press Association’s Andy Newport, though it’s a mystery how the scorer of the Scots’ first goal – David Sneddon, of Fame Academy fame – found himself on the teamsheet.

STICKING with football and continuing fun and games at Ibrox, home of Rangers FC, which, at the weekend, issued another sternly-worded statement aimed at the media, this time the Daily Record.

The statement – headed ‘For the avoidance of doubt’ – also said it was aware of what it describes as “wildly inaccurate stories circulating on various websites and would like fans to know that these flights of fantasy will be monitored by our lawyers”.

The statement continues: “We urge Rangers fans to treat these idiotic and lumbering articles with the contempt they deserve. Better still, ignore them completely. But we must also stress we cannot waste time responding publicly to every blog or ridiculous claim against this club. Also, there is a dangerous proliferation of anonymous obsessives on various social media sites and we will not give them any credence.

“Nor can we react to every journalist and publication who appear to pursue an anti-Rangers agenda, publications such as the Daily Record which today boasts yet another headline which does not accurately reflect what manager Ally McCoist said in his press conference yesterday.

“This paper’s intent is clear and we urge our fans to see it for what it is. If Rangers fans want the truth they will find it only on the club’s official platforms.”

And perhaps not surprisingly, the Record’s Keith Jackson responded on Monday. And insodoing, could not resist taking a pop at rival, The Scottish Sun.

He writes: And now [Rangers] wish the world to know that the Daily Record has adopted some form of anti-Rangers agenda? How absurd. How infantile. How very sinister.” 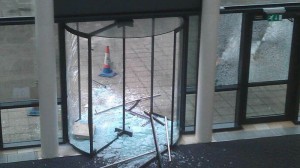 A POP at the Daily Record? Take a look at this pic of the paper’s HQ in Glasgow. The attack on the doors is understood to have taken place during the early hours of Monday. It’s also understood to be now a police matter.

AND finally, thanks to Ken Smith, The Herald diarist, for this: “Staff at at BBC Scotland have been left bemused by an invitation to something called ‘Scotland’s Referendum Connected Studio Event’. The invite explains it’s all about delivering ‘new elements of functionality and engagement tools’, and identifying ‘innovative ways in which open data sets can be used for storytelling’. Says a BBC member of staff: ‘It goes on to say – helpfully – that we must avoid lingo and jargon ‘at all costs’, prompting some to wonder if the writer was being ironic.'”

ANYTHING tickling your tastebuds? Email in the strictest confidence, here.

« In My Opinion: Paul Holleran: Our friends in the North
STV to issue a dividend on back of net debt drop »