Media Broth: Something to chew on…

HEARTS FC are playing a glamour friendly match this evening in Edinburgh, against German side, Wolfsburg.

And to get the media in the mood, at a pre-match briefing held last week, the comms department at Hearts HQ decided to serve up some German food.

Pictured tucking into their bratwursts are STV cameraperson, Steve Kydd, with Sky Sports’ Mark Benstead in the background. 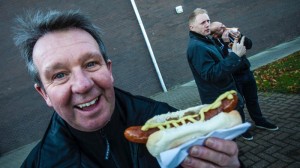 Says the club’s communications chief, Paul Kiddie: “Knowing the Press as I do, their appetite for a story is matched only by their liking for a good feed.

“A mobile bratwurst stall was arranged for the Wolfsburg briefing and it’s fair to say the media went off happy with their lot.

“Hopefully, the teams can serve up a football feast tonight.”

IT was the second birthday party of Creative Edinburgh last night, and at least 200 people turned up at the Bongo Club in the city’s Cowgate to help celebrate.

Usually, such occasions demand of the winners a cheesy smile for the photographer. Not here. Instead it was as menacing a face as they could each muster, because the trophies were… pairs of knuckledusters, from Bonnie Bling.

MIGHT Mark Gorman –  blogger for hire, allmediascotland.com writer, chair of Creative Edinburgh, etc, etc – have been the coolest person in Scotland yesterday?

As he was MC-ing Creative Edinburgh’s second birthday last night, he noted how The Skinny clubs, music, art, etc newspaper had named the party as the coolest thing taking place yesterday in Scotland.

Anything tickling your tastebuds? Email in the strictest confidence, to here.