Media Broth: One biscuit or two?

RUMOURS were, it might be sold for scrap. But allmediascotland is assured it will be erected – if necessary, slightly modified to fit – above the new headquarters in the west of Edinburgh, of The Scotsman newspaper, when in moves in. 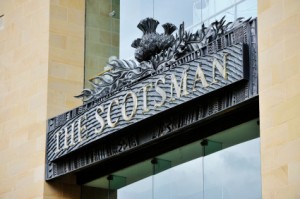 In the rain yesterday, a small group of men in hard hats fought valiantly to take down the large metal masthead over the door of the paper’s current home, in the capital’s Holyrood Road.

The scaffolding has been up for a few days. And a small crane yesterday was added to the action.

THE recently-appointed assistant editor at the Sunday Mail clearly loves the newspaper industry and the excitement of breaking a story.

As Lorna Hughes explained, at the Scottish Student Journalism Awards last week, it is a thrill dating back to when she was aged just three.

Not that she had anything to do with it, of course. But her dad jumped into the river Clyde to save a man and, next up, she and her dad were being pictured in the local, Evening Times newspaper.

STAYING with the Scottish Student Journalism Awards… Among the star-name journalists who volunteered not only to judge the entries but attend the awards ceremony, to explain how they arrived at their respective decisions, were Richard Walker and Hugh Macdonald, respectively executive editor of the Sunday Herald and chief sportswriter, The Herald.

Macdonald was up first, using the occasion to quip to the mostly young audience, “Remember me when I am looking for a shift.”

And Walker warmed to the theme, pointing out to the winner of the sports story prize, Luciano Graca, and saying: “Luciano, remember who gave you your big break.”

ONE of the prizes on offer at the Scottish Student Journalism Awards was in memory of the late Calum Macdonald who was a journalist at The Herald newspaper but who, six years ago, died of cancer, aged just 32.

Just like last year, Calum’s parents attended the awards, with dad, also Calum, being invited to say a few words, from the stage.

And the evening took a moment to reflect as he urged: “It’s always possible to have a moral compass and be a journalist.”

BY the sounds of it, the host of the Scottish Student Journalism Awards – former STV presenter, Stephen Jardine – enjoyed both prizes on offer when he made his first forays into journalism, as a teenager.

His school magazine, from Dumfries Academy, had done well in a competition run by The Scotsman newspaper. First prize was a weekend in Amsterdam, while the second was work experience at The Scotsman.

He later revealed: “As a 16 year-old, I have to admit I didn’t learn much about journalism on the Amsterdam trip but I did pick up several other skills that have proved useful to this very day.”

IT was one of the biggest Scottish stories of last week. Except that, on Wednesday last week, it was the front page story on the Financial Times and the i, rather than more indigenous titles – as pointed out here, by the pro-Scots independence website, wingsoverscotland.

The story? The possible costs of Scots independence and whether any of the calculations might have been ‘misleading’.

THANKS to the Drumlanrig column in Scotland on Sunday, for this: “An unfortunate incident occurred at the launch of STV’s services for Edinburgh and Glasgow when the Shadow Secretary of State for International Development, Jim Murphy, was assaulted by a horse. Well, a horse stood on his foot. To add to Murphy’s embarrassment, the incident was related with some glee to MSPs by his Labour colleague, Ken Macintosh.

“‘For those who were not there, the event included a large and very heavy horse that was intended to look like the iconic statue of the Duke of Wellington outside Glasgow’s Gallery of Modern Art, complete with parking cone on head.

“’The reason why I know that the horse was large and heavy was that it stood on Jim’s foot and would not budge,’ said Macintosh.”

AND thanks to Ken Smith, in his Herald Diary, for this reminder: “So, presenter Gary Robertson is being let go by BBC Scotland, which is causing a bit of a stushie. We remember when Gary replaced Derek Bateman on Good Morning Scotland. On the BBC noticeboard at the time Derek put his Mazda car up for sale with the wording: ‘Genuine reason for sale (owner moving to new job). Starts well and sounds great even in early morning. Being replaced by new hybrid.'”

TALKING of biscuits, take a minute or two to tune into this discussion on BBC local radio; you’ll love it.

ANYTHING tickling your tastebuds? Email here, in the strictest confidence.