Made Here: The Secret Life of Your Clothes, BBC Two

THE Secret Life of Your Clothes is an hour-long documentary looking at the other side of disposable fashion: what happens to our old clothes after we’ve given them to charity.

Made by Govan-based Firecrest Films, it follows the trail to Ghana, said to be the biggest importer of British second-hand clothes.

Says Firecrest: “An estimated one million pounds’ worth of what locals call ‘Obroni Wewu’ – literally, ‘dead white men’s clothes’ – arrives there every week. It’s transformed the country. There are importers making £25,000 a day, but the local clothing industry has been decimated and thousands of workers laid off.

“The damage is also cultural: ‘western’ outfits are fast replacing iconic West African prints. Things have got so bad that the Government has instituted a ‘dress local day’ once a week – Thank Ghana It’s Friday – to encourage people to don traditional costume.” 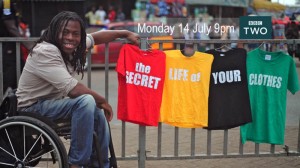 The film is being broadcast on Monday evening at 2100 on BBC Two.

This is a high-end documentary for BBC Two’s key 9pm slot, so needed high production values and mass appeal.

Perhaps the most genius innovation came from director, Andy Wells. Our presenter, Ade Adepitan, is a former paralympic basketball player. We talked early on about how to avoid the misplaced eyeline we’d seen with other films with Ade, as the camera panned constantly up and down between interviewees and Ade in his wheelchair, visually reinforcing his disability.

Andy got Ade to bring his spare chair along, and cameraman, Justin Evans, spent much of the shoot riding in it, filming POVs, interviews and tracking shots, and bringing an incredible fluidity to an already vibrant and colourful story.

The producer/director was Andy Wells, an award-winning freelancer with a superb reputation and our first choice to make the film. 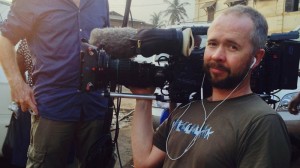 Both our presenter, Ade, and cameraman, Justin, were suggestions from BBC Two, which turned out to be great calls – both hugely talented people who were lovely to be around.

The film was edited by Chris Bird, also a first-class freelancer. The rest of the team are Firecrest staff.

The film was shot on a Panasonic HDX 900 with additional footage using a Canon 5D and also GoPros. We edited on Avid.

One of the biggest challenges was getting Ade around. Africa’s is a filmmaker’s dream, but it’s also one of the worst places in the world for disabled facilities. Taking a presenter in a wheelchair into West Africa’s busiest market was always going to be challenging. Taking a film crew in as well to follow and record pieces to camera along the way even more so.

This was a wonderful film to make – a great story, a colorful, vibrant and visual place to tell it, and the very best team of talented, nice people to make it.

« Your Noon Briefing: STV Glasgow, Darling-Salmond TV debate, etc
In My Opinion: Ryan Falconer: Why media pros should be multi-skilled »