IT was a particularly enjoyable edition of BBC news programme, Reporting Scotland, last Wednesday and the BBC Scotland political editor, Brian Taylor, was absolutely correct in commending the show, which included an interview with First Minister, Alex Salmond, and another with the manufacturers of some fabulous knitwear.

And broadcasting live – in a ‘two-way’ with Jackie Bird, in the studio – he very cleverly praised the show’s breadth “… from hand-knitting to the hard-hitting”.

SO, The Scotsman last week came out in favour of a No vote today. Very limited analysis suggests that the local titles operated by the publisher of The Scotsman – Johnston Press – have been a bit more neutral.

An instruction from upon high or individual editors taking the view themselves that it might be judicious to steer clear of upsetting around about half their readers?

IT’S long since been a thing of the past that you could always find a journalist in the pub at lunchtime. That’s, of course, because they are working harder than ever before. And, as revealed by a report last week in pressgazette.co.uk, they are being sustained in their efforts by… coffee.

Begins pressgazette.co.uk (here): “Stressed-out journalists are drinking more coffee than any other professional group according to a survey published this week.” 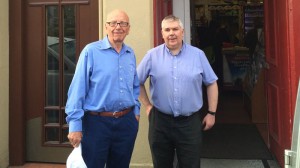 DESMOND Barr is one of Scotland’s better-known newsagents, and his Paisley shop is branded with the colours and masthead of The Scottish Sun.

As The Herald’s Robbie Dinwoodie notes: “Many overseas journalists joined in the applause [from Yes supporters mingling with the audience], while the Scots and Brits clutched their pens and notebooks. We don’t do that here.”

ALSO last Thursday, the Glasgow venue, The SSE Hydro, played host to an 8,000-strong audience of 16 and 17 year-olds to hear the arguments for and against Scots independence, from an illustrious panel.

BBC Scotland – which hosted the event – carried a news item during its early evening Reporting Scotland programme ahead of broadcasting an hour-long show from what it called The Big, Big Debate (watch it, here). The news item was another ringing endorsement of Scotland’s teenagers being well-mannered, engaged and articulate.

But a report (here) from The Independent newspaper was not quite so glowing, picking up on complaints on social media, from some of the audience, of sweltering conditions and… boredom.

THE idea was simple: invite both the indyref Yes and No camps to take part in the allmediascotland.com My Media Day feature, to get a sense of life in the eye of the media storm.

Both camps were kind of enough to agree, but only one could find time in their massively busy schedules to complete the Q&A, which appeared on Monday…

IF you didn’t spot this last week, in our Friday Noon Briefing, here it is again…

HOW might the media report a Yes vote in the upcoming referendum on Scots independence. The website, Buzzfeed, boldly claims the following, here, will ‘definitely happen’.

Definitely worth a look…

THANKS to Ken Smith, in The Herald, for this: “Big protest at the BBC headquarters in Glasgow yesterday [Sunday] about alleged bias in the coverage of the Yes and No campaigns in favour of No, and failing to cover Yes rallies. It explains why one of the protesters was holding up a home-made sign which stated: ‘Mum! I’m probably not on TV!!'”

THE Sunday Herald’s Paul Hutcheon reported a march in Edinburgh at the weekend, by the Orange Order, in support of a No vote.

At one point, it got personal, as he wrote here: “A bald-headed Orangeman, sporting an ‘Allanton No Surrender’ badge, stood within centimetres of this reporter, fixed his gaze at the open notebook and placed his finger on words he clearly did not like. A ‘can I help you?’ was followed by silence and more staring.”

AND the Scots character in The Simpsons cartoon is urging a Yes vote, today.

IT will have definitely split opinion, the independence question being treated in such a light-hearted manner as the front page on Tuesday, from The Scottish Sun.

For those that didn’t see it, the page comprised the headline, Aye Cloud, and a photo of a cloud in the sky that looked like the UK but without Scotland…

THERE, but for the grace of God. The Scotsman’s commercial property section last week carried a photograph accompanying an article about the 2015 Scottish Property Awards.

ANYTHING tickling your tastebuds? Email here in the strictest confidence.