Media Release: A Company, 4 PARA, to take on Scotland’s Via Ferrata for VE Day 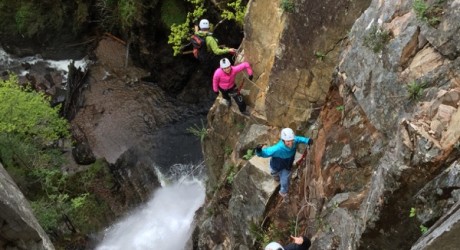 ON Wednesday 27 May 2015 A Company, 4th Battalion The Parachute Regiment (Part of the Army Reserve), will don their full combat kit and take on Scotland’s Via Ferrata in Kinlochleven, in the heart of ‘The Outdoor Capital of the UK’, to commemorate the 70th anniversary of VE day.

Located in the stunning Highlands, but still just a couple of hours from Glasgow, Scotland’s first Via Ferrata runs on the inside of the Grey Mare’s Tail Canyon in Kinlochleven.

Tucked away behind the village and just a short walk from the road, this impressive installation is 500m of iron rungs, fixed cables, bridges and ladders following the course of the river and up the side of Scotland’s third-highest waterfall.

In commemoration of the 70th anniversary of VE Day in 2015, members of A Company, 4th Battalion The Parachute Regiment are making the trip north from their base in Glasgow to take on the challenge.

The Reserve sub-unit will complete the course wearing full fighting order (including an array of weapons) to closely emulate the conditions that would have been experienced by their historical counterparts.

Says a spokesperson: “The original Via Ferrata were developed during the First World War and were used by the Italian army to move troops and artillery across dangerous mountain passes of northern Italy during operations.

“Scotland’s Via Ferrata was built in 2013 by Vertical Descents, the Lochaber-based outdoor activity providers who will be guiding A Company on this commemoration event.”

Outdoor activity company, Vertical Descents, also runs canyoning and rafting trips in the area, as well as having branches on the Scottish east coast and further south, in Cornwall.

Over and above training for military personnel, they run a variety of commercial trips, including a traverse of the Via Ferrata.

Specialist equipment is provided by Vertical Descents and no climbing experience is required, although a head for highs is recommended!

For further information and to arrange interviews or press trips to The Outdoor Capital of the UK – Fort William and Lochaber – please contact:

VE Day and Via Ferrata

Seventy years ago but still fresh in the minds of many, VE Day marks the day of Germany’s unconditional surrender to the Allies in May 1945, and the end of the Second World War (WWII).

WWII saw the majority of the world’s nations embroiled in a conflict that lasted over half a decade, with an estimated loss of 40 million civilians and 20 million military personnel the world over.

Only 20 years previously, the Via Ferrata’s of Northern Italy had played an important role in The Great War, used by the Italian army in defence of the country against Austria and Germany, when avalanches were as much a danger as bullets, and again for the conclusion of WWII as the Allies moved into Italy.

Without the Via Ferrata’s of the Dolomites, many more military lives may have been lost to the dangers of the mountains, exposure and treacherous terrain.

Iron step walkways have been used since the 19th century but the modern Via Ferrata as we know it originated during the First World War.

‘Via Ferrata’ translates literally as ‘Iron Road’, and was developed as a means of moving the Italian troops over the exposed and dangerous terrain in the Dolomite mountains, in Northern Italy.

Otherwise inaccessible cliff faces were made passible by installation of fixed lines, many of which remain today, restored and maintained by the Italian Alpine Club

The Outdoor Capital of the UK – http://www.outdoorcapital.co.uk/

Through a range of collaborative marketing intiatives and activities the organisation promotes Fort William and Lochaber as the best place in the UK for everyone to experience the outdoors; with a view to developing local jobs and wealth and encouraging sustainable economic growth.

Visitors interested in the outdoors are very important to the economy and community of Lochaber. There are over 65 different activities to choose from in an amazing landscape that encompasses the small isles to Ben Nevis with white water rivers, sea, lochs, beaches, forest, glens, cliffs and mountains in between.

And check out too twitter.com/allOutdoorsPR.