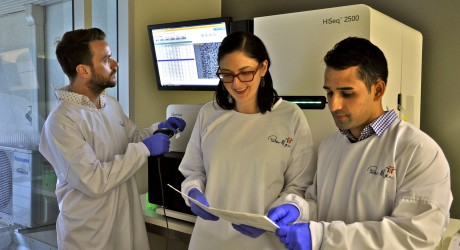 THE largest complete DNA analysis of ovarian cancer in the world, published overnight in Nature, has revealed unprecedented new insight into the genetic twists and turns a deadly form of the disease takes to outsmart chemotherapy, potentially changing treatment approaches for women around the world.

With funding from Scotland-based charity, Worldwide Cancer Research, amongst others, a team was led by Professor David Bowtell from Melbourne’s Peter MacCallum Cancer Centre, and in collaboration with researchers at The University of Queensland’s Institute for Molecular Biosciences (IMB), Brisbane, Westmead Millennium Institute for Medical Research, Sydney, and international colleagues.

The study involved completely sequencing the genomes of 114 samples of high-grade serous ovarian carcinoma (HSC) from 92 patients – collected either at diagnosis, following successful and unsuccessful treatment, or immediately after death – to intricately investigate how cancer evolves to evade initially effective chemotherapy.

He said: “In two of the mechanisms, cancer cells find a way of restoring their ability to repair damaged DNA and thereby resist the effects of chemotherapy; in another, cancer cells ‘hijack’ a genetic switch that enables them to pump chemotherapy drugs out of harm’s way.

“A further mechanism sees the molecular structure of the cancer tissue shift and reshape, such that sheets of ‘scar tissue’ appear to block chemotherapy from reaching its target.

Professor Bowtell says, until now, there has been little information to guide clinicians when selecting treatment for women whose cancer has returned.

“For decades, clinicians around the world have watched HSCs shrink under attack from chemotherapy, before returning aggressively months or years later.

“By completely sequencing the cancers, sampled at different stages of disease, for the first time we can map their evolution under the selective pressure of chemotherapy and begin work on better interventions.”

Professor Anna DeFazio, head of the Gynaecological Oncology Research Group at the Westmead Millennium Institute and co-senior author on the paper, says the study could be practice-changing.

She said: “Each of our findings suggest a refined approach to drug selection in recurrent ovarian cancer, which could include bypassing drugs that are unlikely to be effective.

“This particular view of such a complex disease has never been seen before, and we believe it will lead to more women receiving treatment better suited to their particular cancer, all over the world.”

Dr Helen Rippon, head of Research at Worldwide Cancer Research, said: “We are extremely proud of what has been achieved with the help of our funding. It is a great example of how lab based research can actually have a huge impact on patients.”

“We really need to continue to write the atlas for this complex disease and get more sophisticated about the amount of drug we give, when we give it, and the types and combinations of treatments in relation to each woman’s cancer.”

Dr Ann-Marie Patch, from QIMR Berghofer Medical Genomics Group and formerly from IMB, says cutting-edge technology was crucial to this turning-point in the global fight against ovarian cancer.

“By using the latest sequencing techniques we have been able to find scars from breaks in the DNA that have helped us better define the genes involved in allowing tumours to grow.

“The research team is incredibly appreciative of the many women who allowed their samples to be collected so that we can find out what happens to the cancer cells after treatment and will allow us to work towards better treatments for women in the future.”