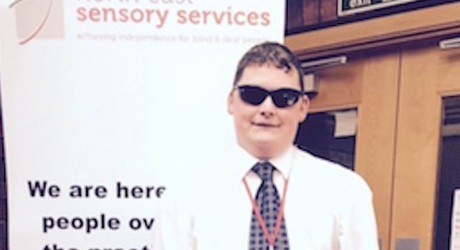 A FUNDRAISING assistant who lost his sight in 2010 is gearing up to pedal 25 miles over hilly terrain in a bid to help raise awareness of a charity that supports people throughout the northeast with severe visual impairment or deafness.

Bruce Cruickshank (32) of Keith, who is the trainee fundraising assistant for North East Sensory Services (NESS) based in Elizabeth House in Elgin, will take part in the 15th Glen Moray Sportive & Bike Ride on Sunday 21 June 2015.

The popular cycling event, in collaboration with the Moray Council, helps to support over 4,500 people throughout the North-east with severe visual and/or hearing impairment or deafness, who use the services of NESS.

The bike challenge will see participants tackle either ten-mile, 25-mile or 75-mile cycle routes, all beginning from sponsor of the event, Glen Moray Distillery, and costs from £5 to £20 (dependent on the distance) for individuals to take part, with all proceeds going straight to NESS.

NESS provides social work and rehabilitation services; a young people’s sensory service; Connect, Inform and Support (CIS) for people aged 65 and over; an assistive technology service; an employment service, interpretation services, transcription services and clubs and groups for users in the area.

There is also an in-house technology room and audio library located in Elizabeth House, Elgin.

Bruce, who was a former digger driver, came to the charity NESS as a service user after he lost his sight due to having Type 1 diabetes in 2010.

He said: “Due to poor control of my condition, my sight and kidneys began to fail over the course of a few years.

“My kidneys started to fail first, so I was put on dialysis. But when I still had my sight, I could have dialysis at home.”

“I had to go into hospital three times a week, for five hours at a time to receive the dialysis.”

Despite having a positive attitude, Bruce admitted it was a difficult time and explained he experienced low points.

“One of the hardest things for me was losing my driving license,” he said: “I was formally driving a digger and tractors for a living. Losing my license was a very hard adjustment.

“And being in hospital for that amount of time three days a week, takes it out of you. Losing my sight and having kidney failure, it was just emotional overload at the time.”

However, in December 2011, Bruce received a double pancreas kidney transplant, and the operation changed the course of his life.

He said: “I did grieve the loss of my sight, but maybe not as much as I should have, because before I had my transplant, I was just wondering whether I was going to wake up in the morning.

“Sight loss was secondary at that time.”

After the operation, which was a complete success, Bruce then set himself realistic goals to achieve.

“I believe if you want to do something, it can be done. For me, not having my eyesight means I have an extra challenge to complete goals. But life should be lived to the full,” he said:

“If you want to do something, you should take steps to go and do it now. You never know what is around the corner. There is no point in dwelling in the past, you have to live for the moment.”

Meanwhile Bruce vowed that he would get himself back to employment, but until then, began using the services of NESS.

He said: “My wife researched what help was out there for people in the area who have visual impairments, and we were directed to the services of NESS.”

“I learned how to use a cane, which is basically like learning to walk all over again. I attended the centre and received support from the staff and the service users.

“I don’t regard NESS as somewhere that I just received help. I’ve been using the centre for five years now, and I regard the people here as extended family.”

Bruce explained people with visual or hearing impairments use the service for a number of reasons.

He said: “Some people use the service for the social aspect, as isolation can be a problem when you have an impairment.

“But NESS provides help in so many different ways. From helping service users to apply to be a blue badge holder, to using a cane and improving or learning IT skills.”

Bruce began volunteering for NESS in 2012.

He said: “I wanted to give something back. I would describe myself as very passionate about the things that I care about.

“Being a service user myself, I found that I could relate to the people I was helping. I think that’s very important.”

In 2014, Bruce was offered the position of fundraising assistant for NESS.

He said: “I always said I would get back to employment after losing my sight, and hopefully through hard work, I’ve achieved that.

“I love my job, I love thinking outside the box and arranging the events in something I am passionate about, because I understand the importance of the service.”

The 32 year-old fundraising assistant will be doing the cycle challenge in tandem with retired volunteer at Elizabeth House, Sandy Comfort, who was inspired to help after attending a ‘lunch and learn’ event a few years ago, where the services of NESS were explained.

Bruce said: “I have been doing some training, such as going to the pool and spinning, and I do have an exercise bike at home, but I really need to step it up a gear in order to complete 25 miles in June.”

Bruce explained that raising awareness about the charity NESS and what it does for the local community is something that is close to his heart.

He said: “The staff and all the volunteers here work so hard to provide so many different services to all the users here. It’s so important that we keep raising awareness and money as it is a charity, and so many people, like myself, rely on its services.”