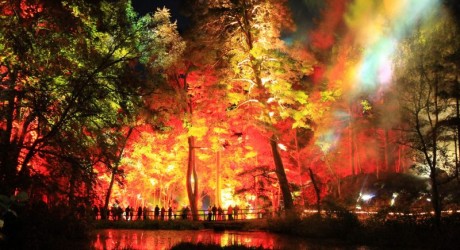 THE ENCHANTED Forest, Perthshire’s multi-award winning sound and light show, has announced that over 55,000 tickets are set to go on sale to the general public on Friday 12th June.

After smashing box office records for the event in 2014, The Enchanted Forest has extended its run from 23 nights to 32 nights this year, opening up thousands of additional tickets, including a dedicated charity night on Thursday 1st October, to meet the increasing demand.

The extended run is expected to be worth more than £500,000 additional income to the local economy, boosting tourism trade in what has traditionally come to be known as the “shoulder season”.

“We are delighted that we have been able to extend our run this year to accommodate growing demand to attend the event and to continue to expand this popular spectacle for visitors to the area.

“We are also delighted to be including a dedicated charity event on Thursday 1st October, which will see three charities benefit this year: PKAVS, Scottish Autism and CHAS.

“As a charitable trust, we are in a strong position to give back to the local community and we have selected three charities that are very active in this area.

“It is marvellous to be able to assist PKAVS, Scottish Autism and CHAS in their important fundraising efforts and we hope that they will benefit greatly from this unique fundraising opportunity.”

Tickets were made available on pre-sale to previous customers in May and sales are already up over 80 per cent on the previous year, prompting organisers to advise customers that they should buy in advance or risk disappointment.

“Even though we have made thousands of extra tickets available by extending by one week, we are already experience strong demand for shows across the run with some show times already sold out before we’ve gone on public sale. The message is very clear: if you have a date and time in mind, don’t leave it to the last minute to book.”

“As a community based event, we are very committed to giving something back and all three charities do exceptionally important work to support families and children across Scotland.

“Every year, we get very positive feedback from customers whose children are affected by autism, and the profound impact the show has on them.

“For other families who are facing challenges, such as those supported by CHAS and PKAVS. The show offers an opportunity to enjoy time together and a break from their normal routine. We are proud to be giving Scottish Autism, PKAVS and CHAS a helping hand.”

“We are delighted to be part of this renowned experience and are pleased that funds raised from the evening will be invested back into our local communities through our work at PKAVS. We look forward to bringing along some of our service users and supporters to experience the magic of The Enchanted Forest on the night too.”

“We are delighted to be selected as one of the charities to benefit from this event for a second year running.

“This is a fantastic opportunity to raise the profile of our services which support people with autism and their families throughout Scotland. We are also looking forward to bringing along some of our service users to enjoy the experience on the night.”

“We’re very excited to have been chosen for the second year as one of the charities to benefit from The Enchanted Forest’s charity evening, which was very popular last year.

“Once again, it promises to be a magical event and all the funds received by CHAS will help us to continue to provide vital support to babies, children and young people with life-shortening conditions.”

The 2015 show, FLUX, sees the return of the creative team that put together the multi-award winning 2013 and 2014 shows, with lighting design by Kate Bonney and Simon Hayes, sound design and composition by RJ McConnell and Jon Beales. As in previous years, they will be led by creative director and producer, Derek Allan, of Allan Associates.

Tickets will be available from 10am on Friday 12th June at www.enchantedforest.org.uk

Tickets for the Charity Night on Thursday 1st October will also be available to book on 12th June by visiting www.enchantedforest.org.uk/charity

IMAGES: Free to use imagery of this previous shows is available on request by email t.fox@volpa.co.uk

• Faskally was purchased by the Forestry Commission in 1953. It covers 365 hectares and is divided in two by the old and new A9. The area where the Enchanted Forest takes place is approximately 66 hectares in size.
• The forest contains 25 recorded species of tree, of which only a handful are native: Scots Pine, Silver and Downy Birch, Ash, Oak, Rowan, Common Alder, Hazel, and Bird Cherry. The oldest known tree is approximately 200-225 years-old.
• Faskally is derived from the Gaelic for ‘stance by the ferry’ which probably relates to an old ferry crossing on the river Tummel.
• The forest attracts approximately 60,000 visitors a year, excluding those to the Enchanted Forest.