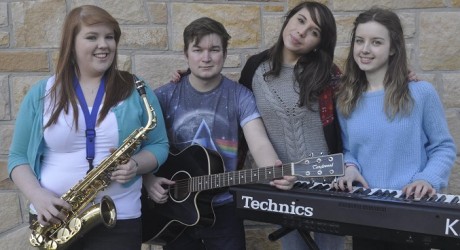 MUSIC students from North Highland College UHI will be showcasing their talents in Inverness next month.

Autumn Sun, a four-piece made up of students from North Highland College UHI’s Alness campus, has been invited to perform as part of a University of the Highlands and Islands concert at Madhatters on Tuesday 9 June.

The Dingwall/Inverness band, which formed in 2014, will deliver a set of original indie folk-rock songs.

Almost Folk, a folk/pop act from the North Highlands also joins the bill. The group formed in 2014 after meeting during their Music Performance course at North Highland College UHI.

Speaking about the forthcoming performance, Gordon Morrison, of Almost Folk, said: “We’re really looking forward to this gig. It’s always a pleasure to play in Madhatters. It’s one of those venues where the audience helps to create a great atmosphere which heightens the experience for everyone involved.”

The University of the Highlands and Islands showcase takes place at Madhatters, Inverness, from 8pm on Tuesday 9 June. It will also feature Alan Carberry and Flat Six, student acts from Perth College UHI.