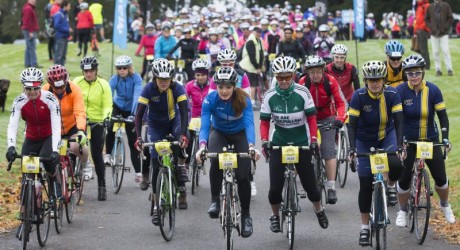 AS Macmillan Cycletta Scotland draws nearer, cycling in Scotland has never been more popular with the latest statistics from Scottish Cycling demonstrating a surge in pedal power since the London Olympics and Glasgow Commonwealth Games.

More people than ever before are saddling up and the demand for Scottish cycling events continues to grow with entries for this year’s Macmillan Cycletta Scotland, taking place at Scone Palace, Perth on July 19th, already up by around 15 per cent on the previous year.

Scottish native Chris Hoy’s Golden performance has clearly inspired many, with Scottish Cycling seeing a 35 per cent growth in membership since 2012 and membership numbers continuing to steadily increase since.

Now in its third year, the growth of Macmillan Cycletta Scotland also reflects a dramatic influx of women into the sport with a 35 per cent increase in the number of ladies participating in cycling events throughout Scotland between 2013 and 2014 and over 10,000 women taking part in a cycling event in the UK.

The UK’s leading women-only sportive has proved a hit with many women. From cycling novices entering the cycling arena for the first time, to more seasoned cyclists with distances ranging from 20km to 150km for those looking for a greater challenge – it offers something for everyone.

Event organisers, Human Race, believe that Macmillan Cycletta’s unique offering of a fun and inclusive option with something for female cyclists of all abilities, has had a positive impact on the number of females joining the cycling community.

“We are very proud that our series of Macmillan Cycletta events reflect what our participants are looking for in an event and we are committed to ensuring that the needs of cyclists, both repeat and new to the event and cycling world, have a brilliant experience.

“The growth in female cyclists in Scotland is phenomenal and we are delighted to be a part of that success for cycling both in Scotland and for the wider UK.

“Women take part in Macmillan Cycletta for all sorts of reasons – to raise money, get exercising or to set themselves a personal challenge. Whatever the reason, you’d be hard pushed to find a more varied and enjoyable sporting event that welcomes female cyclists of all abilities.”

Entries are now open for the Macmillan Cycletta in Scotland at www.humanrace.co.uk/cycletta

Macmillan Cycletta is the UK’s leading series of women-only cycling events, designed for committed cyclists as well as those new to sportives. Cyclists can secure their place at these events by signing up at http://humanrace.co.uk/cycletta/.