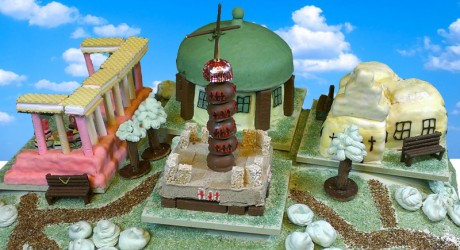 TEAMS of cake makers will descend on the Royal Botanic Garden Edinburgh
on Sunday 21 June, to create a 70m2 edible map of the city, as part of Edinburgh’s inaugural Cake Fest.

Amateur and professional cake makers have taken up their mixing bowls to help create well known monuments from across the city out of sponge, chocolate, icing, biscuit and other ingredients.

The Royal Yacht Britannia, the Scott Monument, the Victorian Palm House, Portobello Promenade and, of course, Edinburgh Castle are just some of the 50-plus sites that will make up the edible Cake Fest map that will sit on the lawn of Inverleith House.

Once complete, the map will be admired by the crowds before being cut up and shared.

Cake Fest is supported as part of Year of Food and Drink Scotland 2015, delivered by VisitScotland and EventScotland.

Fiona Hyslop, Scottish Government Culture Secretary, said: “Cakefest at the Royal Botanic Garden in Edinburgh provides a fantastic opportunity for our visitors and local communities to come together in a unique celebration of the Year of Food and Drink and also the capital’s world-famous architecture and landscapes.

“As we progress through the summer months, there is no better time to sample some of Scotland’s excellent fresh, local produce at the many events across Scotland celebrating the Year of Food and Drink.”

The event also receives financial support from Edinburgh Tourism Action Group and GreenCity Wholefoods. Parts of the map will be created with sponsored ingredients from Tunnocks and Walkers Shortbread.

He said: “Cake Fest is all about getting friends, families and colleagues together to bake and to celebrate good local food.

“The response has been huge and we signed up over 50 volunteer baking teams in no time. All the key landmarks, like the Balmoral Hotel and the National Monument, have been claimed but it’s also wonderful that Cake Fest brings lesser-known buildings into the spotlight, like Lamb’s House in Leith.

“Each baker brings their own handwriting to their cakes and many add a dash of artistic license and humour too, it’ll be amazing to see all that passion and creativity close up.”

GreenCity Wholefoods has sponsored a series of special community cakes which are being made by groups including Pilton Community Health Project (http://www.pchp.org.uk/) and The Yard Adventure Centre (http://www.theyardscotland.org.uk/).

Scott Erwin, of GreenCity Wholefoods, said: “The Cake Fest event is a brilliant way for organisations and individuals to work together and celebrate everything great about their city before tucking into their wonderful creations.

“We’re proud to support Cake Fest and in particular to assist community groups in taking part.”

Elinor Gallant, Public Programmes manager at the Garden, said: “We are delighted to be hosting Cake Fest on Inverleith House Lawn, which offers one of the best views across Edinburgh’s skyline, acting as an ideal backdrop to this ambitious cake map of the city.

“Our late opening for Midsummer has become an annual tradition, and we look forward to welcoming all the bakers and cake eaters to what promises to be a spectacular event.”

Once the edible map is complete – and before it is cut up and shared – baking teams will be asked to choose their favourite cake. The Bakers Choice Award will be presented by Culture Secretary Fiona Hyslop.

As well as the Cake Fest Edinburgh map, there will be food and drink stalls from some of Scotland’s best producers, and free entertainment until late into the evening.

Cake Fest Edinburgh is a free event taking place on Sunday 21 June from 12noon on the Inverleith House lawn at the Royal Botanic Garden Edinburgh.

The Royal Botanic Garden Edinburgh (RBGE) is a leading international research organisation delivering knowledge, education and plant conservation action in more than 80 countries around the world.

In Scotland, its four gardens at Edinburgh, Benmore, Logan and Dawyck attract nearly a million visitors each year.

It is also a registered charity, managed by a Board of Trustees appointed by Ministers. Its mission is to explore, conserve and explain the world of plants for a better future.

The Year of Food and Drink Scotland starts on 1 January 2015 and ends on 31 December 2015. The Year will build on the momentum generated by Homecoming Scotland 2014 by celebrating the role that food and drink plays in shaping our economic success. Through a series of exciting events and activities, the year will showcase Scotland’s outstanding natural larder and our reputation as a land of food and drink.

The Year of Food and Drink Scotland 2015 is a Scottish Government initiative being delivered by VisitScotland in partnership with Scotland Food & Drink, Scottish Enterprise, Highlands and Islands Enterprise, Scottish Tourism Alliance, SRUC and Young Scot.

He is collaborating on this event with James Allenby, freelance marketing advisor, and Dr. Jane Ali-Knight, director of Edinburgh Institute: Festivals, Events and Tourism at Edinburgh Napier University.