Media Release: A weekend of folk – 40 years in the making 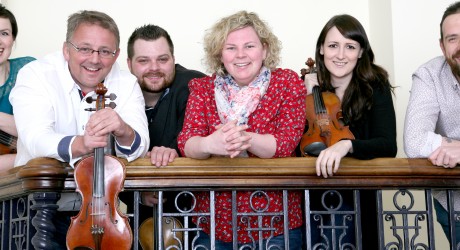 A TOWN in North-east Scotland will be taken over for the 40th year with the sounds of traditional music this weekend.

Recently named the first Scots Toun in the country, Keith will enjoy four days of concerts, ceilidhs, competitions and sessions for all ages, featuring many top performers including Blazin’ Fiddles as headline act.

“Once again we have an extremely exciting, talented and enthusiastic line up of guest artists to entertain us at the 40th Festival with Young Traditional Musician of the Year winners, Bothy Ballad Champion of Champions, Scottish Trad Music Hall of Fame entrants, two of the best dance bands in the country, world-class fiddlers, young local bands and, of course, the fantastic Blazin’ Fiddles.

She continues: “Getting to the 40th festival is a fantastic achievement and thanks must go to all who have helped us get to this stage over the years – committee members past and present, guests performers, helpers and audiences. We hope to make this festival one to remember but most of all one that everyone enjoys.”

Organised by the Traditional Music and Song Association (TMSA) Keith branch, the Festival will have events from Friday night through to Monday morning as well as a display of photos, posters and programmes from the past 40 years in the Pop Up Festival office and shop.

Tickets are selling well though there is still availability for many events during 12-15 June, on a weekend that is also expected to enjoy good weather to enjoy the festival atmosphere.

A choice of three events to attend, all beginning at 8pm:

Saturday is billed as a family day and there will be informal music sessions in Shears, The Deli Shop, Plough Inn and Royal Hotel.

There are also the official TMSA competitions (sponsored by Alex Grant & Co).  Competitors can register at the festival office which will, this year, be in the Pop Up Shop at 175 Mid Street. Entry is free for audience members.

The winners from the day’s competitions will perform at the Prizewinners Concert in St Thomas’ Hall (sponsored by Alex Grant & Co) starting at 6.30pm priced £6 adults/£2 children.

The headline act on Saturday night are Blazin’ Fiddles who are one of the top music groups in the country (sponsored by Alex Grant & Co). They will be performing at the Concert Ceilidh in the Royal Hotel (sponsored by Strathisla Distillery).

Two other Concert Ceilidhs are available on Saturday evening, beginning at 8pm, with events being held in the Bowling Club (sponsored by Peterkins and NFU Mutual) and the Plough Inn (Clark Thomson and Strathdee Properties).

The official programme begins at 1pm in the Bowling Club when kids can go along to enjoy music and song at the Bairns Ceilidh.

2pm sees the start of the free Open Air Concert (sponsored by Alex Grant & Co and Keith Royal British Legion) which takes place in Reidhaven Square. In the event of bad weather the concert will take place in the Royal Hotel.

The Chorus Quaich Competition takes place in the Plough Inn lounge with a new start time of 3.30pm. Anyone can enter this free competition providing that the song they choose contains a chorus.

The Festival ‘officially’ finishes with the Farewell Concert in the Royal Hotel (sponsored by Alex Grant & Co and E W Simmers) beginning at 7.30pm. This is a chance for people to say cheerio to new and old friends.

However, it doesn’t completely finish there as the Plough Inn is host to the Orange Juice Ceilidh on Monday afternoon.