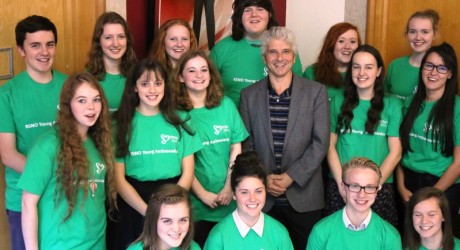 FOR the second year in a row, the Royal Scottish National Orchestra (RSNO) will be taken over by 40 teenagers, for a two-day work experience initiative, where the young people will plan, promote and present an orchestral concert.

The 48 young people, between sixteen and eighteen years old, originate from across Scotland, representing twenty local authorities spanning over 300 miles.

Many of the young recruits have joined the RSNO’s Young Ambassador programme, which has been designed to develop interest in live orchestral music through school-aged advocates across the county.

They will join staff and musicians at the Orchestra’s base in Glasgow on Monday 15 and Tuesday 16 June and will be assigned to each department of the organisation – from marketing and development to artistic planning, conducting and playing in the orchestra.

A number of the young people will learn practical workshop delivery skills which they’ll then use to lead music workshops with primary-aged pupils of Glasgow Gaelic School.

The two-day programme will culminate in a performance with the RSNO at the end of the second day, which is billed as the farewell concert for the orchestra’s current home, the Henry Wood Hall, to which family, friends and special guests will be invited.

RSNO director of Learning and Engagement, Jenn Minchin, said: “We’re delighted to once again open our doors to an influx of youth in this way, giving them the chance to run one of Scotland’s busiest performing arts organisations.

“It will provide valuable experience to those seeking to pursue employment in the arts, and is intended to be challenging, stimulating and fun.

“You never know – we may very well have a future RSNO conductor or chief executive among our group.”

Last year, the RSNO launched its programmes for schools, RSNO Engage for Schools, one of the most comprehensive and far-reaching initiatives of its kind.

Headlining the initiative, the RSNO launched a national composition competition, in partnership with the National Trust for Scotland, open to 12 to 18 year-olds across the country.

Notes From Scotland invites young composers to write a two-minute work for an instrumental trio, quartet or quintet.

The theme for the first year’s Notes From Scotland is inspired by five National Trust locations around the country, and a concert featuring the five finalists and subsequent winner will be held at Perth Concert Hall on Wednesday 17 June.

With one RSNO Young Ambassador for nearly every local authority in Scotland, their championing of the live orchestral experience has contributed to increased attendance among young people, with numbers of RSNO concert-goers under 26 years-old rising to 15 per cent across Scotland and nearly 20 per cent in Glasgow.