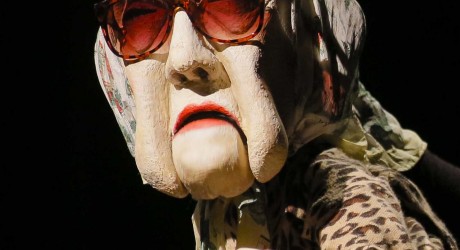 It is being staged at the Pleasance Courtyard (venue 33) from 5 – 30 August (not 17) as part of the Edinburgh Festival Fringe 2015, with a preview performance at the Latitude Festival in July.

One day in a far off place – where the puppets live – a giant fell out of the sky…..

“There were roofs down, windows blown in”, says puppet granny, Tina Henderson. “It wasnae funny.”

Says a spokesperson: “Blind Summit go behind the scenes to interview the puppet citizens who live in the town where it all took place. They uncover a seedy world of gambling, greed, theft and murder.

“They reveal where the Beanstalk came from, how Jack got rich, the truth behind ‘bean stocks’ and ‘hedge funds’, and what really happened the day the giant came crashing out of the sky.”

Citizen Puppet will change the way you feel about fairytales, puppets and finance.

Citizen Puppet, written and directed by artistic director, Mark Down, is the new production from Blind Summit, the makers of sell-out show and multi, award-winning The Table (EdFringe 2011 and 13).

One of the world’s leading puppet theatre companies, Blind Summit was founded in 1997 and are known for their beautiful puppets and unique performance style, which they call  ‘extreme puppetry’ – provocative, funny, political, outrageous, accessible theatre that pushes the boundaries of puppetry.

They have brought to life a three year-old boy in Anthony Minghella’s Madam Butterfly, a singing dog in Simon McBurney’s A Dog’s Heart, an 18-metre high firework-firing Voldemort in Danny Boyle’s Olympic opening ceremony, and a puppet prophet with a cardboard head who lives on a table in The Table (Scotsman Fringe First winner, Edinburgh Fringe 2011, and multiple awards across the world, including three Grand Prix at Festivals in Poland and Spain).

Show description: Once upon a time in a far off imaginary place… a giant fell out of the sky. “There were roofs down, windows blown in,” says puppet granny, Tina Henderson. “It wasnae funny.” Blind Summit, the makers of Fringe First award-winning show, The Table, return to Edinburgh with a puppet-docudrama which tells the ‘true story’ of Jack and the Beanstalk. They look behind the scenes and uncover a dark tale of gambling, greed, theft and murder. Written and directed by Marc Down.

Writer and director: Mark Down

Design: Mark Down and Rachel Good

In 1997, artistic director, Mark Down, founded Blind Summit. Since then Mark and the company have been pioneering their own style of ‘extreme puppetry': a character-led, improvisational reinvention of traditional Japanese Bunraku puppetry for modern audiences.

Their work puts the puppetry centre stage and is dedicated to developing the role of puppetry in adult theatre. Blind Summit is now considered one of the leading puppet theatre companies in the world.

Their shows are devised and directed by Mark Down in collaboration with an exceptional team of trained puppeteers, designers, lighting designers. These shows – such as Low Life, 1984, and The Table –  have toured the world in theatre and puppet festivals.

Mark Down also collaborates to create the breath-taking puppetry in large scale productions such as Anthony Minghella’s Madam Butterfly and Danny Boyle’s Olympic opening ceremony. In 2014, Mark directed his first full-scale puppet opera staging of Stravinsky’s Le Rossignol for the Bregenz Festival, since voted the Best Festival at the International Opera Awards 2014.