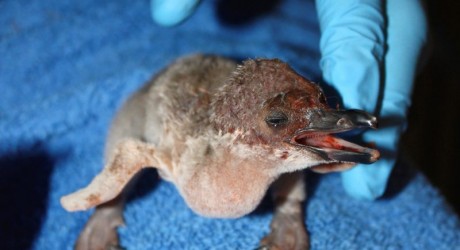 ST ANDREWS Aquarium are this week celebrating the arrival of the very first young Humboldt Penguin chick to be born at the visitor attraction, which successfully cracked its way out of its egg over the course of the weekend.

The egg, belonging to Andi the Penguin, named in honour of Andy Murray who became Wimbledon champion in 2013, is from a second batch of eggs produced by the penguin in May this year.

Andi’s first batch of eggs failed to produce a chick.

When the second duo of eggs arrived a few weeks ago, Aquarium staff were tentatively hopeful that one of the eggs was fertilised. This egg has been kept in an incubator to give it the best chance of hatching.

Early on Friday morning, cracks began to appear and, within a few hours, there were audible signs of life coming from the sturdy egg which took more than 48 hours to hatch.

On Sunday morning, a baby penguin chick, who has since been named Ace, waddled or, more accurately, flopped out of its shell after a gruelling 48 hour escape, and chirped its way into the hearts of the team of Fife aquarists at St Andrews Aquarium who had gathered to watch the spectacle unfold.

John Mace, manager at St Andrews Aquarium, commented: “This has been an incredible experience.

“Because it takes such a time to hatch, we had time to focus the CCTV onto the eggs so we didn’t miss a moment, and to photograph the different stages of hatching as it took place.

“It was terribly tempting to help the wee chick along on its journey into the world, but it’s always better for the chick if we let nature take its course.

“The penguin chick is now acclimatising itself to its new surroundings and we’re providing round the clock care for it in these very early days. The next few days are vitally important so we’ll be keeping a close eye on the chick.”

For further information or to arrange a press visit contact Fraser Kirk on 01738 658187 or email f.kirk@volpa.co.uk