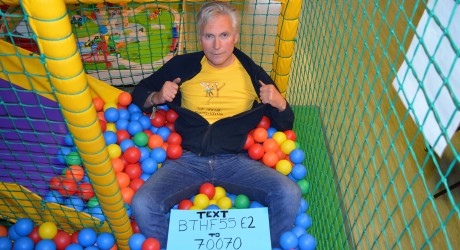 A MAJOR new superhero text to donate campaign for ARCHIE Highland will be launched at a mini version of Belladrum, which is taking place on the children’s ward at Raigmore Hospital.

The Mini Bella event will go ahead on July 7 and will see sick kids receive a superhero style reception as well as some festival themed fun, as the new text to donate ARCHIE Highland campaign gets underway.

The campaign is linked to Belladrum’s 2015 superheroes theme – with a set of family three-day tickets (two adults, two children) up for grabs as a prize.

The sell-out annual Belladrum Tartan Heart Festival, near Beauly, has set itself the ambitious challenge of raising £50,000 at this year’s event towards the £2 million Highland Children Unit’s Appeal, launched by the ARCHIE Highland Foundation.

Joe Gibbs, owner of Belladrum Estate and promoter of the festival, which is renowned for its family fun atmosphere, is among a new team of prominent local business people helping to raise the final £300,000 needed for the appeal.

Doctors and nurses, members of the ARCHIE Highland fundraising team and Joe himself will help kick off the #everydaysuperhero text to donate campaign at the Mini Bella event, alongside some well-known Highland figures who have signed up to help launch the text campaign on the day.

During the competition, individuals are being asked to post a superhero ‘selfie’ at work or in public on either Facebook or Twitter, and make a donation to the Belladrum ARCHIE Highland campaign by texting ‘BTHF55 £2′ to 70070, before nominating at least one friend to do the same.

The best image at the end of the month-long campaign will be chosen on the 28 July, and will win a set of family three-day tickets to this year’s sold out Belladrum Festival.

Joe said: “Belladrum’s culture is firmly rooted in family life, and children are at the heart of that. We have always been big supporters of ARCHIE Highland, but this year we want to do even more.

“The mini festival is an attempt to bring some light relief to the children who often come from far afield to receive treatment at Raigmore Hospital by the amazing staff who work there.

“We can’t wait to get the text to donate campaign started, and hopefully the event will encourage people across the Highlands and Islands to get involved and to text and donate and nominate a friend.”

Laura Mackintosh, head of fundraising for ARCHIE (Highlands and Western Isles) said: “We are really excited for the mini festival, and we are delighted that Joe Gibbs, alongside the other organisers, want to bring a Mini Bella to the kids who are receiving treatment at Raigmore Hospital.

“We are confident that the people across the Highlands and Islands will get on board and take part in our text to donate campaign. It really is for a great cause.”

Issued by Frasermedia Ltd on behalf of ARCHIE Foundation.