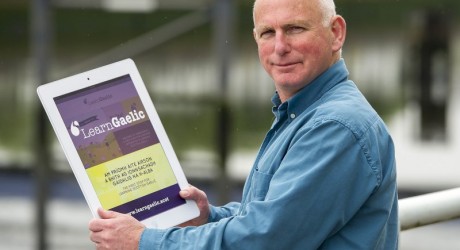 LearnGaelic.scot is the popular interactive website that provides a first stop for anyone interested in learning Gaelic with a new emphasis on adult learners.

Launching the website in his home town of Glasgow, Gary, who has starred on the big screen in films such as Billy Elliot and Gangs of New York as well as TV programmes, including Silent Witness, had to learn Gaelic for his part as Colum McKenzie, the laird and chief of Clan McKenzie, in the TV series Outlander.

Gary was joined by Gillebride MacMillan, the celebrated Gaelic singer who plays Gwllyn the Bard in Outlander, and the Gaelic coach for the series, Àdhamh Ó Broin.

Since it was first launched back in 2011, the LearnGaelic website has proven popular with Gaelic learners of all ages but in particular, the adult audience.

As well as the distinctive .scot url, the new design focuses the site’s resources specifically on adult learners.

The LearnGaelic.scot/dictionary has become the most comprehensive language tool for Gaelic learners containing 70,000 specially recorded sound files which give instant access to the correct pronunciation of Gaelic words.

New grammar and ‘Use Gaelic’ sections have been added as well as new resources being introduced on a weekly basis to provide fresh content for learners.

A ‘Watch Gaelic’ resource has also been introduced offering learners the ability to view un-subtitled clips from BBC ALBA programmes with a Gaelic transcription, an English translation and vocabulary for each clip.

The site has grown significantly with a particular spike on Twitter following the launch of Outlander.

Endorsing the website and highlighting the importance of the Gaelic language in the broadcasting industry, Gary Lewis said: “I have connections to North Uist where my wife’s father hails from so I have enjoyed the Gaelic language for many years and have a strong interest in learning it.

“My role in Outlander has allowed me to gain my own respect for the language and the enhanced LearnGaelic.scot website is a great online resource which should help encourage other learners of the language.”

Alan Esslemont, head of content, BBC ALBA and executive producer of LearnGaelic.scot, said: “Since we launched back in 2011 we have noticed more people accessing information on smart mobile devices so a priority was to make it far more accessible and user-friendly for this audience.

“Online activity is a great means to help promote and enhance Gaelic language learning and as such we have witnessed a huge increase in the number of visitors using our site.

“The number of social media followers has also dramatically increased over the last year with the launch of Outlander contributing greatly towards the awareness of LearnGaelic’s Twitter and Facebook pages.

“It has been fantastic to see the site grow in terms of its contribution to Gaelic learning and we are delighted to be offering an enhanced service with additional resources, interactive courses and learning tools for all abilities.”

LearnGaelic.scot is a collaboration between Bòrd na Gàidhlig, MG ALBA, the BBC, The Board of Celtic Studies Scotland and Sabhal Mòr Ostaig, in co-operation with a wide variety of educational and Gaelic bodies and with the support of the Scottish Government.