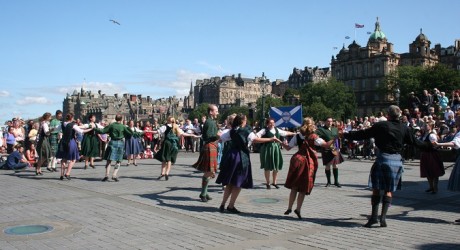 THIS month, one of Scotland’s longest-running international folk dance festivals is taking place in Edinburgh, Falkland, Stirling, and Perth.

This is an exciting opportunity to compare and contrast music, dance and costumes such as lederhosen with kilts and peasant costumes, lace veils, and knee high boots, from the four countries.

Said Jen Wood, chair, Dunedin Dancers: “Each country, this festival has its own distinctive style of dancing and music – energetic and exciting from Italy; acrobatics and spectacle from Germany; seasonal and courting dances from France and country, highland and step dances from Scotland.

“This is great for the opportunity for all the participants to learn each other’s dances and join in social activities as well as performing.

“We also very much appreciate how people in Edinburgh welcome the participants by hosting them in their homes so there is a lot of cultural exchange and fun throughout the week.”

Many of the performances between 19-25 July are free and suitable for all ages, except for the Church Hill Theatre show or entrance fees for Falkland Palace and Stirling Castle are payable:

* Performances at the Scottish Parliament 1pm-3pm

All three invited groups are taking part in the Festival for the first time.

* Parade from village at 2pm (free)

* Performances at the Scottish Parliament 1pm-3pm

* Performance at the Mound 12pm-2pm

More information about the groups involved:

The folklore group, A Pacchianeddra Sansustisa from the San Sosti (‘San Salvatore’) area in Calabria, Italy demonstrates song and dance in choreographed performances, performed in local costumes. The group consists of about 40 members – 14 dancing couples, two singers and ten musicians and organises cultural events with the schools and communities of the local area. They play musical instruments linked to the Calabrian tradition including accordion, bagpipes, tambourine, and guitar. In their displays, the group evokes the significant moments of the 12 months of the year and the religious activities of the rural ‘sansostese’ territory through infectious dance and song. They are part of the cultural association - Cantori del Pettoruto – which aims to preserve the local traditions through researching songs, music, poetry, dance and handmade musical instruments.

The New Scotland Dancers met the Pacchianeddra Sansustisa group at a festival in Italy last year (2014).

This dance group is grounded in the German traditions, in particular those of the Thüringen area. Their lively, attractive and artistic dances and performances are based upon their research of the old traditions, but they also perform more modern dances. The high quality of their performances earned them many praise at international dance festivals. Their performances are crafted to appeal to today’s public. They perform regularly in Rudolstadt itself, in the surrounding Thüringen area, and further afield.

Dunedin Dancers first met the Thüringer Folklore Tanzensemble a few years ago at a folk dance festival in Portugal.

The group Le Point d’Alençon (which means Alençon Lace, named after the famous needle lace made in their town) consists of 80 dancers and musicians – adults and children – dressed in traditional costumes as worn around 1830/1850. They represent the local tradition of the area through themed performances, and have successfully performed in France and abroad. The group also organises a yearly folk dance festival in Alençon, the Festival des Folklores du Monde.

Dunedin Dancers was set up initially over 40 years ago to organise an International Folk Dance Festival every two years. Over time they have grown to include a regular weekly get together to dance, perform demonstrations and run other social activities, based in Edinburgh. They have also been part of the Tattoo dance team when Scottish Country Dancing was on the programme. Their dancing repertoire consists mainly of country dances in the traditional sets of three and four couples, but they also perform Highland Dancing, Scottish Step dancing (hard shoe) and ceilidh sets. The complexity of the performances lies mostly in the dance figures to the two different tempos in Scottish country dancing: fast (reels, jigs, and hornpipes) and slow (strathspeys). Music for their dancing is provided by accordion, fiddle and pipes.

Founded as a student society 60 years ago, New Scotland continues its close relationship with Dunedin dancers as the graduate group it set up to run a regular International Folk Dance festival. It offers regular weekly classes in Scottish Country Dancing, Highland, Ceilidh and Scottish Step dancing mainly for students at the University, though non-students are also welcome. Similar to Dunedin Dancers, New Scotland frequently take part in Folk Dance Festivals across Europe. The two groups often collaborate to send groups of dancers to these events and perform demonstrations locally. And of course, they combine their efforts to present the Dunedin International Folk Dance Festival experience to the people of Scotland.

MEDIA RELEASE issued by TMSA. You too can post your story ideas for journalists (aka press or media releases), on allmediascotland.com. Email here for more information.