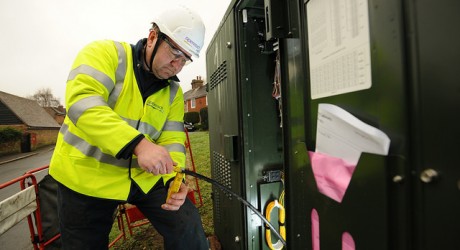 DIGITAL connectivity is changing forever on the Outer Hebrides with the announcement today (Tuesday, July 7) that high-speed fibre broadband has started to become available in Stornoway.

Around 3,600 Stornoway households and businesses will be the first in the Outer Hebrides to have access to the new services thanks to the Digital Scotland Superfast Broadband project.

Customers connected to the network through the first 11 street fibre broadband cabinets installed across the town and at Tong can order now, or very soon, as services become available through internet service providers.

In addition to the local connections, the core network links to the mainland open up ‘game changing’ capacity for access to previously unavailable business services.

It’s the first step in a £146m region-wide roll-out which will see the majority of premises across the Outer Hebrides better connected by the end of 2016.

The project is being led in the region by Highlands and Islands Enterprise (HIE), with work on the ground being carried out by Openreach, the local network division of private sector partners BT. Funding is coming from the Scottish Government and the UK Government as well as HIE and BT.

Deputy First Minister, John Swinney, commented: “This is a momentous day and a huge first step in transforming the future of connectivity for communities and businesses across the Outer Hebrides.

“This investment is designed to reach Scotland’s remoter communities, none of which would have seen these kinds of connections through the commercial market.

“It marks more positive progress thanks to the Digital Scotland Superfast Broadband Programme.

“Every week we make strong progress with around 7,000 new premises having fibre made available to them. Thanks to this, and together with commercial work by the private sector, we are creating an infrastructure which will see us fulfil the Scottish Government’s commitment to deliver world class connectivity in Scotland by 2020, ensuring we are a world class digital nation.”

Digital Economy Minister, Ed Vaizey, said: “This is brilliant news for homes and businesses on the Outer Hebrides who can now, for the first time, access superfast speeds. The UK Government is investing £120m in Scotland as part of its transformation of the UK’s digital landscape that will see 95 per cent of the nation have access to superfast speeds by 2017.”

The delivery of fibre based broadband to the Outer Hebrides and the wider Highlands and Islands has been hailed as the most complex undertaken in the UK.

Alex Paterson, HIE chief executive, commented: “The scale of the challenge to bring modern, fast and reliable broadband to our remotest areas is huge. On the Outer Hebrides the project has seen five sub-sea cables for inter-island and mainland links installed last year, and fibre cabling now runs the length of the islands.

“Over the course of the next year we will see the roll-out of this game-changing network reach at least 70 per cent of premises across the islands. We won’t stop there and we are ambitious that the huge step up in capacity that it brings will help us find solutions for more and more people in even the hardest to reach areas.”

The first services in Stornoway are being delivered by ‘Fibre to the Cabinet’ (FTTC) technology. Openreach has linked existing telecoms cabinets in the town to new fibre cabinets. Customers connected to these cabinets will be able to check online or with their internet service provider if they can now place an order. They are not upgraded automatically to fibre.

Additional engineering work will be needed later this year for a number of households and businesses in Stornoway, which are currently connected direct to the telephone exchange, rather than via a cabinet. The work involves reconfiguring of the network and the building of additional cabinets.

In the short term, those in Stornoway currently connected to ‘exchange only’ lines will see an increase in speeds in the coming weeks as a result of the improved capacity to the island.

BT chief executive, Gavin Patterson, described the Highlands and Islands broadband roll-out as by far the most ambitious and challenging BT has undertaken anywhere in the UK.

He said: “This has been the most complex subsea project BT has tackled in UK waters and the first time we’ve laid 20 seabed cables in a single operation. The whole team has knuckled down to face massive engineering challenges on sea and on land and I’m proud of the effort they’ve put in.

“Thanks to their hard work over many months, people in the Western Isles can now begin to enjoy the benefits that fast, fibre broadband brings to these shores.”

He added: “This spider’s web of submarine fibre optic cables is delivering a seismic shift in communications for Scotland’s island communities, bringing them in closer touch with the rest of the world than ever before.”

The announcement was made at the Creative Industries and Media Centre in Stornoway, which opened in 2012 and now houses MG ALBA (The Gaelic Media Service) and BBC Radio nan Gaidheal as well as STV, while Moja TV and Corran Media, two local independent television production companies, are also based in the centre.

Donald Campbell, MG ALBA chief executive, warmly welcomed the investment being made in high-speed fibre broadband, he said: “For MG ALBA, the BBC and our other partners working in television here in Stornoway this new capacity is vital for us as we and the rest of the industry move to file-based HD digital workflows.

“For other creative partners in Stornoway and throughout the Western Isles, who will benefit from the new high-speed fibre broadband, this represents an opportunity to grow their businesses and collaborate in digital projects in ways not possible before.

“We congratulate the Digital Scotland partners on this major infrastructure development which I am sure will bring huge benefits to the businesses and communities throughout the Western Isles.”

Due to the current network topography, and the economics of deployment, it is likely that some premises within selected exchange areas will not be able to access fibre-based broadband at the same point in the roll-out.

Further announcements will be made as more areas are able to access the growing fibre infrastructure.

Deployment plans can be subject to change.

Further roll out for the Hebrides

The fibre roll-out for more areas of the Outer Hebrides is scheduled for next year. The programme is designed to roll the services out from the existing infrastructure. The online interactive map gives a broad idea of areas we will be working in and when at www.hie.co.uk/whereandwhen but it is not until the engineers are working on the local network that we can provide more detail on who will be reached.

Every local network is designed to reach as many people as we can – within the budget and with the available technology. The exchange itself becomes irrelevant, we are building hundreds of cabinets (Fibre to the Cabinet – FTTC and FTTC EO) across the region to bring services, and there will also potentially be some Fibre to the Premise technology.

However, we know we won’t reach everyone in this phase of roll-out. There are places which have small numbers of homes, often some distance from each other which we can’t currently reach. There are also premises which while attached to the infrastructure may be too far away to benefit from an increase in speed. (As a rough rule – anyone up to 1km from the cabinet will get superfast speeds, and up to 2km may get an uplift, but after that speeds drop away fairly quickly.)

- We are placing cabinets and infrastructure to maximise the numbers reached
– There is an Innovation Fund as part of the project which will explore how alternative technologies could provide solutions.
– We do hope that any developments in technology and any additional funding might help us extend reach further
– Community Broadband Scotland (CBS) is also on hand to provide advice and support for community groups who aren’t able to access services through the rollout and who wish to explore their options.

At this stage it is expected that services will be available to around 70 per cent of premises by the end of 2016.

Highlands and Islands Enterprise (HIE) is an economic and community development agency delivering the Scottish Government’s economic strategy across a region which covers more than half of Scotland.

HIE, as part of the Digital Scotland Superfast Broadband project, is leading on one of the most complex fibre broadband deployment projects in the UK. We aim to deliver services to 84 per cent of premises across the Highlands and Islands by 2016, and are working to find ways to reach the remaining 16 per cent.

As part of that, we manage Community Broadband Scotland which works with communities across Scotland to help them find sustainable ways to get faster broadband.

Equally important is our work to provide specialist online and face-to-face support for businesses and communities to help them maximise the benefits of digital connectivity.

BT’s purpose is to use the power of communications to make a better world. It is one of the world’s leading providers of communications services and solutions, serving customers in more than 170 countries. Its principal activities include the provision of networked IT services globally; local, national and international telecommunications services to its customers for use at home, at work and on the move; broadband, TV and internet products and services; and converged fixed/mobile products and services. BT consists principally of five customer-facing lines of business: BT Global Services, BT Business, BT Consumer, BT Wholesale and Openreach.

British Telecommunications plc (BT) is a wholly-owned subsidiary of BT Group plc and encompasses virtually all businesses and assets of the BT Group. BT Group plc is listed on stock exchanges in London and New York. For more information, visit www.btplc.com.

Superfast Britain is a Government programme of investment in broadband and communication infrastructure across the UK. Run by the Department of Culture, Media and Sport, this investment helps businesses to grow, creates jobs and will make Britain more competitive in the global race. The portfolio is comprised of three elements:

• £150m to provide high speed broadband to businesses in 22 cities