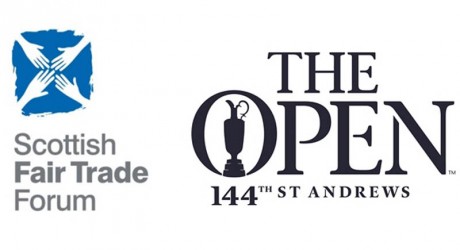 FAIRTRADE products will be available throughout the catering outlets at the 144th Open, which is being played in St Andrews this week.

Mary Popple, chair of the St Andrews Fairtrade Town Campaign, was pleased to confirm that all tea, coffee, hot chocolate, sugar and bananas supplied throughout the Championship will be Fairtrade.

The St Andrews Fairtrade Town Campaign has been working closely with The R&A, which organises The Open, since the last time the Championship was staged in St Andrews in 2010.

This has led to The R&A introducing Fairtrade products as part of The Open’s broader commitment to sustainability.

Michael Wells, The R&A’s director of Championship Staging, commented: “The Open is one of the world’s foremost sporting events and we pride ourselves on the quality of experience which we provide to all our patrons, spectators and guests.

“A huge amount of work goes into successfully delivering a world-class catering operation and we are continually looking for ways we can improve.

“We are delighted to be working closely with the St Andrews Fairtrade Group to ensure our food and drink offering meets high standards for ethical production.”

For on-site publicity at The Open, a flag of the St Andrews Fairtrade Town logo has been produced, which will fly in the tented village, and there will be information boards around the event explaining the use of Fairtrade produce.

The forecasted consumption for Fairtrade produce at The Open this year includes 1,000 kg of coffee, 10,500 tea bags, 64,000 sugar sticks and 80 kg of hot chocolate.

Mary Popple, chair of the St Andrews Fairtrade Town Group, said: “It has been excellent to work closely with The R&A around their use and promotion of Fairtrade produce at the 144th Open and we are confident that the support for Fairtrade by an event of this magnitude will have far-reaching positive impacts moving forward.”

Martin Rhodes, director of the Scottish Fair Trade Forum, said: “It’s good to see Scotland’s status as a Fair Trade Nation further enhanced by the growing commitment to Fair Trade by high profile events and supporters such as The Open and this is an excellent example of the impact that local Fairtrade Towns groups can have.”

Adam Gardner, communities campaigns manager at the Fairtrade Foundation, said: “The Open has made a fantastic commitment to the tea, coffee, banana and cocoa farmers and workers around the globe working hard to bring us the products we love, but all too often not receiving a fair price for their work.

“Fairtrade today reaches millions of vulnerable farmers and workers in around 70 countries – thanks to the ongoing support of campaigners and businesses in the UK. Thank you and congratulations to St. Andrews Fairtrade Town Group for their hard work and dedication.

“We’re delighted to have The Open on board and we hope the decision to serve Fairtrade at this major sporting event will inspire other organisations and events to follow suit.”

200,000 spectators are expected to attend The Open in St Andrews this year, which will provide an enormous boost to local businesses.

The Open in St Andrews in 2010 delivered an estimated economic benefit of £100 million. With the help of students from the University of St Andrews, the town group has also updated their local Fairtrade Directory, a list of retail and catering outlets in St Andrews that sell or serve Fairtrade products.

These guides will be widely available in accommodation used by visitors to The Open, and throughout the town.

The Scottish Fair Trade Forum was founded in 2007 to help Scotland become one of the world’s first Fair Trade Nations, which was achieved in February 2013.

Through its work with other Fair Trade bodies in the UK and beyond, the organisation engages directly with many Fair Trade groups, schools, universities, local authorities and others to support ongoing Fair Trade activity and encourage it to grow stronger.

The Open is golf’s oldest championship. Played since 1860 on iconic British and Irish links courses, it is the game’s most international Major Championship with qualifying events on every continent. For one week each year, the pursuit of the famous Claret Jug trophy is the focus of the sporting world, followed globally by millions of fans.

Staged by The R&A, The Open delivers an estimated annual economic benefit of up to £100 million to its host region, while the Championship’s commercial success supports the development of the game, worldwide.

MEDIA RELEASE issued by the Scottish Fair Trade Forum. You too can post your story ideas for journalists (aka press or media releases), on allmediascotland.com. Email here for more information.