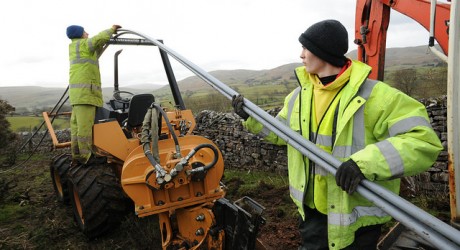 THE next stage of the £410 million Digital Scotland Superfast Broadband rollout is set to reach 73,000 more homes and businesses nationwide.

The premises are located in 24 local authority areas all across Scotland, from Bressay in Shetland to Dolphinton in the Scottish Borders.

Among the places getting high speed fibre for the first time are some of the small communities and towns around Loch Ness and the picturesque Highland fishing village of Mallaig.

Communities in Midlothian, Clackmannanshire and the Falkirk area will also benefit, as the Digital Scotland rollout reaches the three local authority areas for the first time.

The first connections will start to go live by the end of this year, as engineers from BT’s local network business, Openreach, continue work on the ground. A full list of the latest locations is at the end of this release.

The announcement comes on the same day as the UK Government announced the UK-wide rollout of superfast broadband has now passed more than three million UK homes and businesses. The rollout is on track to reach 95 per cent of the UK by 2017 and is now reaching around 5,000 additional premises every day.

The Digital Scotland rollout has passed more than 394,000 premises since it started last year. It means the project is more than half way to its target of making the technology available to 750,000 properties by the end of March 2018.

Fibre broadband enables multiple users in a home or business to access the internet, download and share large files at the same time and more quickly than ever before. As the higher speeds (up to 80Mbps*) become available, anyone interested in signing up for fibre-based services should contact their broadband service provider.

Scottish Government Deputy First Minister, John Swinney, said: “It is fantastic news that a further 73,000 homes and businesses will be able to receive fibre broadband thanks to the Digital Scotland Superfast Broadband programme.

“Every day, we are continuing to build on our digital infrastructure –supporting the Scottish Government’s commitment to deliver first-rate connectivity in Scotland by 2020, ensuring we are a world class digital nation.

“By reaching out to those communities who would not have been covered by the commercial market – in towns and into some of our most rural areas – we are ensuring that the connections which are made will bring many benefits to the Scottish people both at home and in business.”

Digital Economy Minister, Ed Vaizey, said: “Our nationwide rollout of superfast broadband has now reached more than three million homes and businesses in the UK, with more than 394,000 in Scotland alone now able to connect to the new fibre network.

“The UK Government is investing £120m to roll out superfast broadband in Scotland and I’m delighted at the tremendous progress being made which will see around 95 per cent of Scotland able to access superfast speeds by March 2018.”

The new locations announcement follows news earlier this week that almost £18 million will be made available in Scotland to take the rollout of fibre broadband further.

“Across the UK, 23 million premises are now covered by BT’s open access network, with three million of those enabled under the BDUK programme. Our Openreach engineers have worked tirelessly to connect some of the most remote parts of Scotland, from Shetland and the Hebrides to Rothesay in Argyll and Bute.

“On the back of strong take-up of fibre services in partnership areas, BT is releasing additional funds which will enable us to go even further at no extra cost to the taxpayer much earlier than originally expected. Around £17.8 million is available for Scotland to help us reach even more communities like the ones we’re announcing today.”

Users can check the interactive map on the Digital Scotland website (http://www.digitalscotland.org/whereandwhen) to find out if they can get the service and further information is also available on Twitter @ScotSuperfast or Facebook at www.facebook.com/scotlandsuperfast

Due to the current network topography, and the economics of deployment, it is likely that not all premises within selected exchange areas will be able to access fibre-based broadband at the same point in the roll-out. Further announcements will be made as more areas are able to access the growing fibre infrastructure.

Our deployment plans are subject to change. The expectations reflected in this plan are reasonable, but because our rollout involves risks and uncertainties, actual results may differ from those expressed or implied.

Areas being announced: * These exchanges feature twice because they serve premises in more than one local authority area. ** Infill is where the project is providing additional fibre broadband coverage in areas which already have existing or planned fibre coverage.

Highlands and Islands Enterprise (HIE) is an economic and community development agency delivering the Scottish Government’s economic strategy across a region which covers more than half of Scotland.

HIE, as part of the Digital Scotland Superfast Broadband project, is leading on one of the most complex fibre broadband deployment projects in the UK.

We aim to deliver services to 84 per cent of premises across the Highlands and Islands by 2016, and are working to find ways to reach the remaining 16 per cent. As part of that, we manage Community Broadband Scotland which works with communities across Scotland to help them find sustainable ways to get faster broadband.

Equally important is our work to provide specialist online and face-to-face support for businesses and communities to help them maximise the benefits of digital connectivity.

Its principal activities include the provision of networked IT services globally; local, national and international telecommunications services to its customers for use at home, at work and on the move; broadband, TV and internet products and services; and converged fixed/mobile products and services. BT consists principally of five customer-facing lines of business: BT Global Services, BT Business, BT Consumer, BT Wholesale and Openreach.

British Telecommunications plc (BT) is a wholly-owned subsidiary of BT Group plc and encompasses virtually all businesses and assets of the BT Group. BT Group plc is listed on stock exchanges in London and New York.