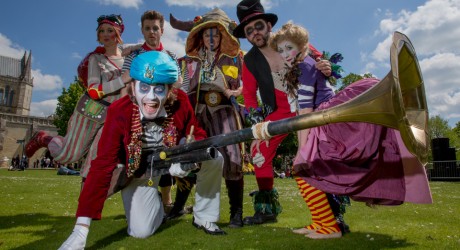 EVER wanted to count a Decapus’s legs? Or wondered what a Whistling Pank eats?

Would you like to catch a glimpse of the fabled ‘Massive Paw’? Or lick a Tresillian Toad?

Then you’ve come to the right place!

Dr Longitude and his team of ‘experts’ are here to guide you through a puppet-packed, ludicrously lyrical and magically musical tour of the Imaginary Menagerie’s finest exhibits.

From the acclaimed, award-winning creators of The Terrible Infants, Alice’s Adventures Underground and The Trench, Les Enfants Terribles return to Edinburgh with their most silliest, fun and entertaining family shows to date suitable for big kids and small grown-ups.

Featuring puppetry, music, comedy and physical theatre, The Menagerie is not to be missed!

Written by Anthony Spargo and Oliver Lansley a published playwright who also works extensively in television – co-creating/writing ITV2’s ‘FM’ and numerous other projects, including ‘WHITES’ which was shown on BBC2 and starred Alan Davies.

He was named a ‘broadcast hotshot’ by Broadcast magazine and won the ‘Multi-talented’ award at Channel 4’s 4-Talent Awards.

“If Roald Dahl and Tim Burton had ever met and decided to open a travelling circus, the result might have been something close to Les Enfants Terribles’ superb storybook world.” – EDINBURGH SPOTLIGHT

“Better than any family show has a right to be.” –  The List

“There wasn’t a child in the audience that wasn’t squealing with delight.” –  Three weeks

“A great choice if you’re looking for something that works for young and older alike. We enjoyed every marvellous minute!” - PRIMARY TIMES

MEDIA RELEASE issued by Muckle Media. You too can post your story ideas for journalists (aka press or media releases), on allmediascotland.com. Email here for more information.