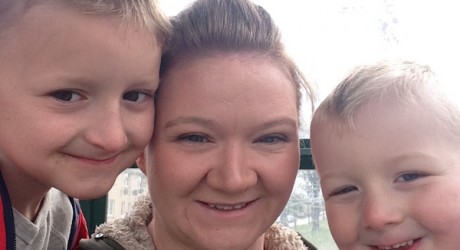 A NORTH-east mum took on an extreme test of physical endurance to help raise funds for a charity that is making her son’s life better.

Kerry Mackenzie, 32, from Aberdeen, took part in the Tough Mudder course at Drumlanrig Castle, Dumfries and Galloway, in June – completing the 12-mile challenge in four-and-a-half hours.

Mum of three, Kerry, took on the challenge to raise funds for Aberdeen-based charity, North East Sensory Services (NESS), which provides help and support to people who are deaf, blind, hard of hearing or have a visual impairment – including Kerry’s three year-old son, Matthew, who has hearing difficulties.

Through her JustGiving page, Kerry managed to raised almost three times her initial target of £200, with her final total reaching almost £600. She completed the punishing course in four and a half hours including a 12-mile hill hike.

Kerry said: “Those who know me know about Matthew and his struggles with his hearing over the last three years. He is three going on four and it’s been a long road, but the people at NESS have been great with support and encouragement for Matthew and others with sensory problems.

“For me, it was a an easy decision to give something back to them as a thank you for everything they do for adults and children, so I have chose to raise money for them so they can keep supporting all of us in the fantastic way they do.

“Matthew has always struggled with his confidence because of his hearing problems, but attending the children’s groups at NESS has really helped, because he gets to meet and play with other children with similar issues which makes him feel like he is not alone.

“Now he has his hearing aids and has made friends at NESS he is a totally different person and has so much more confidence.”

NESS, which has offices in Aberdeen, Dundee and Elgin, exists to help people overcome the potentially devastating effects of serious sight or hearing loss, whether they have been born deaf or blind or have developed serious vision or hearing problems.

The organisation supports 4,500 people across the North-east with both social work services and life-enhancing services.

Neil Skene, fundraising manager at NESS, said: “We are extremely grateful to Kerry for taking on the grueling challenge to raise money for NESS to allow us to carry on providing help and support to people with sight or hearing loss.

“Although we provide help and support to people of all ages, young people in particular can benefit greatly from being made to feel part of something and that despite their impairment they can live a perfectly happy and normal life.

“For children Matthew’s age, the world can seem like a big, scary place at the best of times, but if you have difficulty seeing or hearing the world around you things can be even more daunting, so our groups help them to feel at ease.

“We rely enormously on donations and fundraising and without people like Kerry taking on these challenges for us we would not be able to do the work we do.”

While the grueling Tough Mudder challenge was the first activity Kerry undertook to raise funds for NESS, she said it will not be her last.

She said: “I had a great time doing Tough Mudder, even if I was exhausted by the end, and it felt great to raise so much money for NESS, so I will be doing more fundraising and I am looking for different challenges to take on next.”