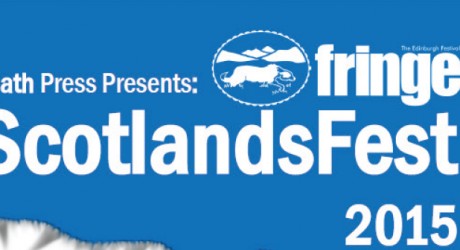 THERE has been some debate over the last few years concerning the extent to which the Edinburgh Festival Fringe covers Scottish history, art and culture.

Tickets for individual events are also available from the Edinburgh Festival Fringe website.

What makes visual art in Scotland distinctive and often subversive? Richard Dermarco and Sandy Moffat have won OBEs for their contributions to Scottish visual arts and have been unafraid to engage with controversial issues concerning art and life. Come along for a meeting of minds between two of Scotland’s leading artists and commentators. Click here to book tickets.

3.30pm – Poems for the Early Days of a Better Nation

Poetry, specifically performed poetry, can be a great agent for political, social and cultural change. Do you agree? Join editor of Scotia Nova: Poems for the Early Days of a Better Nation, Alistair Findlay and other poets as they address issues of social justice and how to build a better Scotland. Click here to book tickets.

Is an independent Scotland still round the corner? Lesley Riddoch, author of the best-selling Blossom: What Scotland Needs to Flourish and director of Nordic Horizons will discuss the future of Scottish politics and, most importantly, what real change could mean for its citizens. Click here to book tickets.

The cultural importance of Sir Walter Scott was celebrated last year on the 200th anniversary of the first appearance of Waverley with an installation at Waverley Station and events around Scotland. Jenni Calder (who has recently adapted Waverley for the modern reader) and Alasdair Hutton (chair of the Sir Walter Scott Club), will revisit the work of ‘the wizard of the north’ and shed a new light on his genius. Click here to book tickets.

The tradition of ‘flyting’ is defined as ‘a contest consisting of the exchange of insults, often conducted in verse, between two parties’. From Prime Minister’s Questions to internet rap battles, flyting, in its various forms, can still be found today. Come along to see historian Owen Dudley Edwards and poet Rab Wilson locking literary horns. Click here to book tickets.

Born in South Uist, Angus Peter Campbell writes in the tradition of magic realism. His deeply musical use of language is a delight. One of the most lyrical, subtle and humorous writers in Scotland today, he carries a sense of place within, as do the characters that people his novels. Click here to book tickets.

Gregor Ewing walked 1,000 miles in the footsteps of Robert the Bruce, a rebel who won freedom for Scotland. Stuart McHardy, writer of Scotlands Future History, joins him in a discussion of the value of history and might even sing a song or two. Click here to book tickets.

With their own individual and informed slant on current affairs, journalists Peter Geoghegan and David Torrance report from the front line of political action and event. We live in interesting times. Come along to hear their analysis. Click here to book tickets.

1.45pm – Scotland Through the Lens

Andy Hall’s photography demonstrates his love of Scotland and highlights the mystic beauty and raw energy of our country. This is your opportunity to hear one of Scotland’s best landscape photographers talk through the process behind some of his favourite shots featured in his book, Scotland’s Still Light, from inspiration to equipment. Click here to book tickets.

With the 100th anniversary of Keir Hardie’s death on 26 September, Pauline Bryan, Richard Leonard and Henry McLeish look to the future for the Labour Party and revisit its roots. What has to be done to ensure its continued identification with socially progressive ideas? Click here to book tickets.

5.15pm – Cairney and Demarco in Conversation

Two livewire octogenarians compare notes on what it takes to make an impact in the world of Scottish arts and beyond. Richard Demarco is an internationally-renowned artist and patron of all the arts who has helped make the Official Edinburgh Festival and the Fringe what they are today. John Cairney is known worldwide for his one man performances of Burns and Robert Louis Stevenson. Click here to book tickets.

What can Scotland learn from our Scandinavian neighbours? Do we need to fundamentally reform the entire political structure in this country? What steps need to be taken to make Scotland a fairer, happier place? Join former First Minister Henry McLeish and political scientist Michael Keating for an in-depth discussion on the future of Scottish politics. Click here to book tickets.

What do we mean by ‘Scottish art’? Alan Riach and Sandy Moffat, authors of Arts of Resistance and Arts of Independence, will challenge you to think about your own attitudes to art and the artist, nationalism, politics, philosophy and modernity. All of these, they argue, are inextricably linked. Click here to book tickets.

In Notes of a Newsman, Scottish anchor, John Mackay, has written a blow-by-blow account of 25 years of journalism in Scotland with all its highs and lows. How does it feel to report on a major tragedy such as the Lockerbie disaster? And what are his impressions of the key players on the Scottish scene, from Donald Dewar to Nicola Sturgeon? Click here to book tickets.