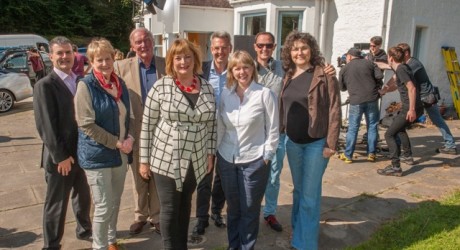 PRODUCTION company, Young Films, and the cast and crew of BBC ALBA Gaelic drama, ‘Bannan], were delighted to welcome Cabinet Secretary for Europe & External Affairs, Fiona Hyslop MSP, to their production base and on location of the current series of Bannan currently being filmed in Sleat, Isle of Skye.

Bannan, commissioned by BBC ALBA and funded by MG ALBA in partnership with Creative Scotland is the first Gaelic drama to be produced in over 20 years.

The three pilot episodes screened in September 2014 were very well received by the BBC ALBA audience with 62 per cent of the channel’s audience tuning in to watch the first episode; the highest reach of any program on the channel since its launch on Freeview in 2011.

Following this success, BBC ALBA commissioned Young Films to deliver a further 15 episodes with the next installment of five episodes being transmitted on BBC ALBA on 21st September.

Chris Young, producer of Bannan and managing director of Young Films, said: “We are now filming the last five half-hours of the 18 episode Bannan cycle, and it’s amazing to think that we only started filming the pilot exactly two years ago next week.

“That’s nine hours of TV drama produced in Scotland in two years, which is something I’m very proud of.

“The support we have received from both Creative Scotland and the Scottish Government has made a huge difference in making this happen.

“In the process of filming Bannan, we have managed to train a whole new home-grown team of new writers, directors, producers, actors and technicians in long-running TV drama.

“I believe Bannan provides a very good model for how we can significantly expand indigenous film and television production and training in Scotland.”

Ms Hyslop was joined by Richard Findlay, chair of Creative Scotland, and was able to witness first hand some of the opportunities that have been provided by the drama during the past three years and meet production staff that have benefitted from working and being trained on Bannan.

From the beginning, Bannan has focused on providing training and development opportunities at all levels of production and development. Around 20 per cent of Bannan’s budget can be attributed to training and staff development and almost half of the 70-plus cast, crew and staff working on the show are going through some form of training /career progression.

As a result, Young Films has witnessed significant progression and development of skills across the whole spectrum of TV/film talent and craft disciplines.

Chris added: “I believe that with Bannan Young Films has created a strong model for the future and we are confident that we have the resources and talent to deliver outstanding drama from a Scottish base to a national and international TV and cinema audience.”

Ms Hyslop said: “Meeting some of the talented crew who have been trained to a world leading standard while working on Bannan demonstrates just some of the benefits of Scottish film and TV production.

“Bannan is a major Scottish success story – reaching a bigger audience than any other programme on BBC ALBA since it launched in 2011 and allocating a significant proportion of its production costs to training and professional development opportunities for young people.

“Our continuing support for Bannan underlines the Scottish Government’s firm commitment to increasing indigenous language programming which we have made clear to the UK Government we expect to see more of through the BBC Charter renewal process.”

One of those who has gained experience from working on Bannan is Laura MacLennan, 24, who works as a scriptwriter and script-supervisor.

Laura is from Barvas on the Isle of Lewis and graduated in 2012 she was given the opportunity to work as a trainee alongside Bannan script supervisor on the pilot and has never looked back.

Laura said: “I am now the sole script supervisor, and have been involved in translating scripts from Gaelic to English. This involvement has given me an extensive knowledge of the characters and of the Bannan style of writing.”

This allowed her to become a fully-fledged scriptwriter on the show writing and delivering two episodes.

She added: “Two years ago, I didn’t know what a script supervisor was, and I had not prepared any creative writing since school.

“Now, I’m relishing the challenges and honing my skills to write must watch TV – opportunities I’d never have got without the help of Young Films and the opportunities Bannan has presented.”

Mairead Hamilton is another young trainee benefitting from valuable experience on Bannan. Mairead comes from Sleat and after working as a runner on the pilot and after expressing an interest in directing she was given the opportunity to work as director’s assistant to Tony Kearney and then offered the role as trainee director.

In the last block of filming, Mairead directed episode 11 and is currently directing another episode on this block.

Mairead said: “To say I am grateful to Chris Young, Morag Stewart, Tony Kearney and Young Films as a whole for this extraordinary opportunity is to put it far too mildly!

“I have learnt so very much from my time on Bannan and it has been an absolute joy to see the evolution of the show and the actors and to work through the medium of the language, which is integral to the story – Gaelic.”