Media Release: The Wee Theatre Festival is a big success 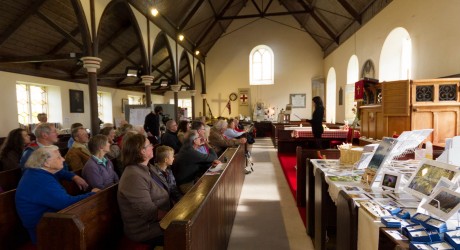 OVER 150 people saw short theatrical performances in unusual venues across Inverness-shire on Saturday 5 September as part of The Wee Theatre Festival which was organised by Play Pieces Arts.

The one-day festival, which raised over £2,000 in Crowdfunding in three weeks, saw new work written by Highland writers, specifically for spaces which were already part of Open Doors Day.

Explained artistic director, Lindsay Brown: “We wanted people to be able to find out something more about the places they were visiting as part of The Wee Theatre Festival as well as raise awareness about the fantastic theatre-making in the Highlands.

“We asked all the venues in the area if they wanted to take part and our hands were bitten off! We had to turn down quite a few exciting options.”

The Festival, which secured additional funding from Highland Council due to its innovative approach, has been a huge success, including a sell-out performance on Saturday evening in Velocity Cafe, Inverness, with all six performances being repeated to a new audience.

Added Lindsay: “It was mainly a new audience as the event sold out a week in advance; however, one German couple had seen the very first performance of the day and followed us round the sites and came to Velocity to see them again.

“They loved it and wanted to tell all their friends to come over to Scotland next year to see The Wee Theatre Festival.”

There are already plans afoot for next year, taking The Wee Theatre Festival to other areas of the Highlands to work with more Highland writers and performances as well as finding new ways to present theatre to audiences.

All the performances from the Festival have been recorded and will be made available online through www.playpieces.co.uk.

Play Pieces Arts is currently waiting for news on their application to Creative Scotland for their lunchtime theatre season which they hope will return in 2016 as well.

MEDIA RELEASE issued by Play Pieces Arts. You too can post your story ideas for journalists (aka press or media releases), on allmediascotland.com. Email here for more information.