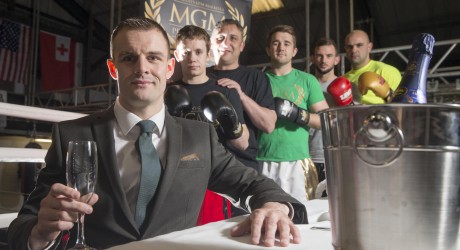 THE world-famous Macklin’s Gym Marbella (MGM) has arrived in Scotland where it will be managed and developed by ambitious boxing promoter and trainer, Sam Kynoch.

Kynoch, who traded a promising career in the legal profession to allow him to commit full-time to boxing, is the head of new professional organisation, MGM Promotions Scotland, based in Glasgow and with ambitions to grow the sport across the country.

The inaugural MGM Promotions Scotland event, with David Brophy among those on the bill, took place in front of a packed crowd in Glasgow in August.

The business of MGM Scotland continues to grow after a sell-out debut appearance at Meadowbank in Edinburgh this month. It was this week announced MGM Scotland will return to the capital venue on Saturday, December 5.

Kynoch, who previously ran the successful SK Boxing Promotions, has also launched an MGM Scotland Dinner Club to help attract funding that will support aspiring boxers within his stable.

Its first flagship event is at Glasgow’s Crowne Plaza Hotel on Thursday, October 29.

The 28 year-old, who sees hundreds of young boxers attend his gym on a weekly basis, said: “This is a landmark moment for me and I hope it is the same for the development of boxing in Scotland.

“The joint venture with Macklin’s Gym Marbella and the creation of the brand, MGM Scotland, provides a brilliant platform from which to grow the sport, increase awareness and attract funding to support the next generation of Scottish boxing.

“Boxing in Scotland has a wonderful history and with a little imagination, no end of hard work and the right partners there is no reason it can’t scale those heights again.

“To fulfil our ambitions it is vital we attract new streams of revenue into the sport and that is exactly what the MGM Scotland Dinner Club will hope to achieve – and I’m really encouraged by the talks I’ve had with a number of companies already.”

Kynoch first caught the boxing bug as a 12 year-old when he first joined Perth Railway Amateur Boxing Club and went on to have glittering amateur career. As a boxer, he had 50 contests and won several national titles, including the British Universities Championship.

While still deep in his studies, Kynoch founded SK Boxing Promotions in 2008. The first event was held at a gym with just 30 spectators, subsequent events grew in stature with both dinner events for more than 500 guests and public shows with more than 1,000 attendees.

Kynoch was also able to attract some of the sport’s biggest names, with Ricky Hatton and Evander Holyfield both appearing as speakers at SK Boxing Promotions events.

For many people, a promising career as a corporate lawyer is the stuff dreams are made of, but for Kynoch, it wasn’t enough – with the University of Glasgow graduate leaving law in 2012 to commit to developing the sport he loves on a full-time basis.

He said: “I certainly took an unusual path to get where I am. Boxing was taking up so much of my time that I had to make a decision. For me, I am never going to go into anything half-hearted so I had to leave behind my career as a lawyer to fully focus on boxing and now on building MGM Scotland into one of Britain’s biggest professional boxing organisations.

“I was definitely at a crossroads but when it came down to it, there was no doubt in my mind. I had to do this. MGM Scotland isn’t just a nine-to-five job. When I am not working on the next event, I am in the gym training fighters. It’s constant but I wouldn’t have it any other way. It’s a thankless task sometimes but I always aspired to be a promoter. “

Now, with his legal career very much in the rearview mirror, Kynoch has put all his weight into MGM Scotland which under the banner of he also runs Scotland’s largest boxing gym, based in the southside of Glasgow.

As well as Brophy among the boxers currently under Kynoch’s wing are two-time British champion, David Barnes, and promising up-and-comer, Gary Murray, along with the likes of Gordon Brennan, Mark Kerr, Ross Henderson and Lewis Benson.

Now, growth is the name of the game for Sam, with an event at the SSE Hydro the ultimate goal for his boxing promotion.

With a number of cards set to take place this year, a Boxing Dinner Club event at the Crowne Plaza will be the organisation’s flagship event.

It will feature a whole host of Scotland’s top boxers, from former Commonwealth Games athletes to undefeated pros and will be the first event for MGM Scotland’s new dinner club.

The Dinner Club will provide the perfect setting for corporate hospitality – with four events taking place each year and a range of membership packages on offer.

He said: “MGM Scotland is very well known in the boxing community. We are fairer to fighters and our cards offer something different. It’s an entertainment business, and that’s what we want to do – entertain people.

“The next stage is to grow our reputation and become a household name to those who aren’t necessarily fans of the sport.

“In our stable of boxers, we have the calibre of people who can bring big events to Scotland and I am certain that will become a reality.”

For details about MGM Scotland and its new Dinner Club, contact info@mgm-scotland.co.uk.