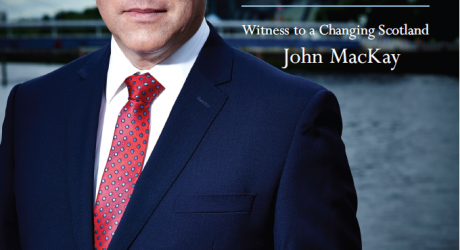 “I had to make the dash to the changing room to grab a selection of shirts. I then had to stand in a small room with an understandably irate Salmond trying to calm him down as he stripped off his shirt and tried on other ones. He was fuming.”

JOHN MacKay’s Notes of a Newsman charts a nation’s coming of age in some of the most important pieces of reportage from this period of transformation in Scotland.

With nearly 30 years at the newsfront, MacKay has now opened his own diaries and notes, placing them alongside newsroom scripts and interview transcripts. The mix is electric.

This is at its most acute in his accounts of the Lockerbie disaster and the Dunblane massacre.

Reporting on tragic circumstances is emotionally challenging, and it is clear from his personal notes that MacKay’s professionalism on camera does not dilute his feelings of empathy for those directly involved.

In a career that spans from the Thatcher years to the Independence Referendum, John MacKay has borne witness to the most defining events of recent times.

He has met (and has formed an opinion on) the significant players in every sphere of Scottish life, tracking their trajectories of achievement, and the occasional plummets into ignominy.

Since its inception a regular host on Scotland Tonight, he has been a game changer in the way news from Scotland is presented.

Now, in Notes of a Newsman, he brings us the news as we have never seen it before.