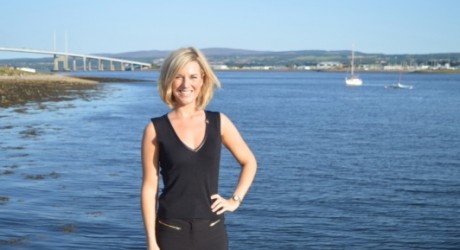 AN award-winning Scottish media communications firm has further strengthened its PR team with a key appointment at its Highland office.

Frasermedia, which is headquartered in Albyn Terrace in Aberdeen, and also has an office in Corrie Lodge in Inverness, has recruited former journalist, Jenna MacCulloch, as account manager to service its client base across the north.

Born and bred in Inverness, Jenna is now the first point of call for Frasermedia’s clients operating across the Highlands and Islands, as well as a support for clients looking to expand into Aberdeen and the Central Belt.

A former award-winning journalist, Jenna has over six years experience in both print and broadcast media, formally working aschief reporter at a Highland newspaper, before moving into the PR industry.

Miss MacCulloch, 31, said: “It’s a really exciting time at Frasermedia and I’m delighted to be part of the rapidly expanding business as the company continues to experience growth in the public relations sector across the Highlands and Scotland.

“As well as delivering Frasermedia’s award-winning PR service to our clients in the north, my role is also focused on growing the firm’s profile and client base through continued business development.”

With investment in staff development and training a priority for Frasermedia, the firm has also recently announced two in-housepromotions at its west end Aberdeen headquarters.

Her specialisms include oil and gas and property, and recently she completed the Basic Drilling Awareness course at Aberdeen Drilling School and oil and gas training at the University of Aberdeen.

Julia graduated with a BA Honours degree in communications with public relations from the Robert Gordon University in 2014.  She specialises in food, drink and tourism PR, as well as social media.

Managing director of Frasermedia, Pauline Cook, said: “Jenna’s appointment to lead the Inverness office will be key to allow us to offer clients across the Highlands and Islands the same level of service that we deliver in the North-east.

“The company has continued to go from strength to strength, and with a recent move to larger offices in Aberdeen, it gives us the capacity to further grow the team and our services. Jenna has a wealth of experience, and having her manage our Highland accounts will be a real benefit to our clients.

“I’m also delighted to announce promotions within the team. Frasermedia is dedicated to staff development and we are focused on continuing to create a strong team work with our valued client base.”

Frasermedia, which was launched in 2007, delivers a number of media-based services in addition to PR, including crisis management media response training and support, presentation skills training and corporate DVD production.