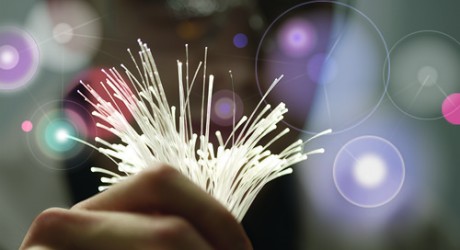 Aim for a new universal minimum broadband speed of five-ten Megabits per second (Mbps) for every home and business, subject to regulatory support
• Vast majority to get well ahead of minimum speeds – plan to extend fibre broadband coverage beyond government’s 95 per cent of premises target
• From superfast to ultrafast: 10m UK premises to receive ultrafast broadband with speeds of 300-500Mbps by end of 2020. 1Gbps service also to be provided
• ‘Never say no’ – BT to build on its record of co-funding 90 community broadband schemes
• Openreach to increase on-time customer installations beyond Ofcom regulated levels in new Charter
• New ‘View My Engineer’ service from Openreach aims to improve customer experience by giving text progress updates and engineer’s mobile phone number
• New report values BT pledges as worth £20 – £30bn contribution to UK economy

BT chief executive, Gavin Patterson, today unveiled proposals which will give a major boost to broadband speeds in Scotland.

• tackle slow speeds in hard-to-reach parts of the country;
• achieve a step-change in speeds overall, with ultrafast rollout starting next year; and
• improve customer service, through a number of commitments unveiled by Openreach.

Patterson said: “For the past five years, the UK has been the largest digital economy in the G20, by percentage of GDP.

“We think the UK has an even brighter future ahead if we make the right decisions today.

“We want to forge an ultrafast future for Britain and stand ready to help government deliver the broadband speeds necessary for every property to enjoy modern day internet services, such as high definition TV streaming and cloud computing. To achieve this, we need a collaborative effort across industry and government.”

BT Scotland director, Brendan Dick, said: “These proposals will have a major impact on the future success and prosperity of Scotland. BT is already leading the way with more than 1.8 million households and businesses in Scotland having access to high-speed fibre broadband – and that number is growing by around 7,000 a week.

“Now, we are preparing to push ahead with the ultrafast broadband revolution and ensure that even people in the most challenging locations can get broadband capable of delivering sophisticated services, such as high definition video.

“In an increasingly competitive world, this further major investment will be another vital boost for our nation. Nobody is doing more than BT to ensure that Scotland has world class broadband communications.”

Ninety per cent of UK premises can already access fibre broadband, putting the UK top of the EU’s largest countries, according to regulator Ofcom.

Patterson committed BT to supporting government in delivering a new universal minimum broadband speed of five-ten Mbps, enough for everyone in the UK to enjoy popular internet services like high definition video.

Patterson emphasised the need for a supportive regulatory and government policy environment to bring about a commercially viable investment.

Industry-leading research there includes tests on promising new technologies such as ‘wireless to the cabinet’ and ‘long reach VDSL’, to help bring higher speed broadband to hard-to-reach communities.

Patterson also pledged the company would introduce a satellite broadband service for some of the UK’s more remote premises by the end of the year.

He made clear BT would “never say no” to providing faster broadband to communities, promising the company would instead explore innovative funding and technical solutions.

He said 90 communities in the UK were already benefitting from this approach.

The BT chief executive said the UK would go beyond government’s current 95 per cent target for fibre availability, thanks to ‘success dividend’ clauses in contracts covering rollout co-funded by BT, Whitehall and local councils.

The clauses mean BT has to reinvest or return money if take-up exceeds certain levels in areas where public funds have been used.

A sum of £130m is already being released and is potentially available to get the UK towards having fibre available at 96 per cent of premises. A greater proportion of premises will have access to fibre broadband than can access mains gas.

He also announced plans to supply fibre broadband for all new housing developments, either through BT’s own efforts or in cooperation with developers.

From superfast to ultrafast speeds, reaching 10m UK premises by end of 2020

Patterson stressed the potential benefit to homes and smaller businesses from ultrafast broadband technology. These services will sit beside ‘Ethernet’ broadband services which already offer ultrafast speeds to larger businesses and organisations which can pay for bespoke dedicated lines.

Patterson went beyond his January statement on ultrafast broadband, to say BT’s new services of 300-500Mbps would reach 10m UK homes and smaller businesses by the end of 2020, and the majority of premises within a decade. A 1Gbps service will be provided for those that want even faster speeds. The connections on offer would be a combination of Fibre-to-the-Premises technology, as well as new G.fast technology, which uses existing Fibre-to-the-Cabinet technology.

Delivering a step-change in customer service for all: new Openreach charter

Joe Garner, the Openreach chief executive, said there was more to do on service. He emphasised his organisation’s progress on service, exceeding all 60 Ofcom service standards in 2014/15, as well as hiring 3,000 extra engineers, reducing installation waiting times, fixing faults faster and halving complaints. Garner made clear his ambition to exceed by six per cent Ofcom’s 2017 minimum standards for delivering new connections on-time.

He also cited ‘View My Engineer’ as a key step forward. This is a new service which gives customers text progress updates plus their engineer’s name and mobile number should they need to make contact.

He highlighted an issue which arises because customers often cannot deal direct with Openreach, but can only deal with their retail broadband provider. Garner declared he is open to having Openreach deal directly with end-customers, subject to consulting Ofcom and telecom providers.

At the conference, a new report was also unveiled by consultants KPMG, valuing the impact of BT’s future commitments as worth £20 – £30 billion to the UK economy over the next decade.