Media Release: Home or away, Ashton Lane is the Warrior way 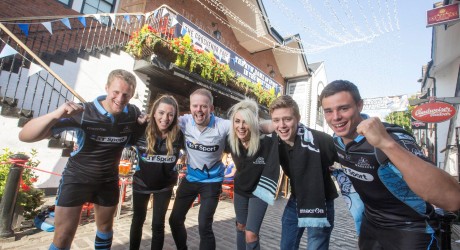 GLASGOW Warriors may be visiting Munster on Friday night, but supporters of the GUINNESS PRO12 champions will feel right at home.

Fans will now be able to experience the unrivalled Scotstoun atmosphere, whether Glasgow are playing at home or away, as the Grosvenor Café will show all matches live on the giant screen with sound.

With around 5,000 season ticket members, Glasgow Warriors home games are now one of the hottest tickets in town.

Glasgow Warriors winger, Lee Jones, said: “The club is growing all the time and all the players can feel the supporter base is getting bigger.

“It’s great to have the Grosvenor Café as a supporter’s hub, as it’s so close to the ground and is in one of the most iconic places in the city.”

Also at the café, rugby fans will be able to watch Finn Russell, Stuart Hogg, Leone Nakarawa and the rest of the 21 Warriors competing at the Rugby World Cup.

Jenna Main, area sales and marketing manager at G1, added: “In a previous incarnation, The Loft was the undisputed home of sport in the west end.

“Today, the team at the Grosvenor Café are delighted to once again cement their position by becoming an official partner of Glasgow Warriors.

“Having invested significantly in Sky and BT Sport, we will be showing the very best football and rugby fixtures including all the Warriors action, live on our giant screen. With exclusive discounts available to season ticket members, we can’t wait to welcome the fans back to Ashton Lane.”

Issued by The BIG Partnership on behalf of Glasgow Warriors. For further information, please contact: