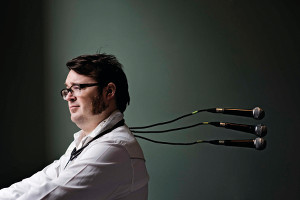 AT the beginning of October Jarred Christmas – the New Zealander with the generous sideburns, the glasses and the microphone – brings a truly electric set of top-quality comedy to the Kingdom of Fife, as part of the Gilded Balloon’s Fife Comedy Circuit.

Laying his comedy smack down in the form of energetic storytelling, pumped full of passion, charisma and community banter, Christmas will headline a stellar comedy line up at Carnegie Hall, Dunfermline, on Tuesday 6 October, Rothes Hall, Glenrothes, on Wednesday 7 October and Adam Smith, Kirkcaldy, on Thursday 8 October 2015.

Joining the Christmas party on the Fife Circuit will be Jen Brister, the blunt, sardonic, half-Spanish comedian from South London and the master Glasgwegian gagster, Chris Macarthur-Boyd.

Compering the comedy circuit will be Scotland’s rapidly-ascending Glasgow comic, Ray Bradshaw, one of the funniest and most exciting acts on the UK comedy scene, with an unmistakable talent for the ‘left field’, and the joke with a sting in its tail.

Jarred Christmas’s strong and distinctive comedy, that sizzles with originality, is a hilarious thrill ride of laughs and gasps with an edge of anger that manifests itself in his incredible rants against the small things in our lives.

Issues will be dealt with, feelings will be kicked in the teeth, current affairs will be smacked round the head, hype will be used and tall tales will be told. Christmas has the jokes, he has the stories, he has the energy, he has the dynamic onstage persona and he has the ability to improvise and roll with anything that’s thrown his way – everything needed to ensure the good times flow, non-stop.

Jen Brister’s hilariously evocative character sketches display a flair for cartoonish exaggeration and a mastery of both physical comedy and timing. Having been brought up to ignore the national skills of low talking, passive aggression and queuing, Jen finds herself without the necessary British skills to survive.

She’s now on the cusp of turning 40 and, with the voice of a megaphone and the subtlety of a brick, she’s belatedly airing her frustrations and voicing her anger.

In his early 20s, Chris Macarthur-Boyd is establishing himself as one of Scotland’s comedy gems, mastering side-splitting self-deprecation with enviable ease. It can be said that MacArthur-Boyd is up-and-coming, in as much as it would be impossible for him to go downhill.…

He still lives at home with his mum and dad and is unemployed!

Chris reached the finals of So You Think You’re Funny and Scottish Comedian of the Year 2014 as well as being nominated for Best New Scottish comedian at the Scottish Variety Awards.

Ray Bradshaw, the jovial and friendly people’s comedian, has travelled the length and breadth of the country telling jokes to anyone that will listen and has produced stand-out festival performances at T in the Park and RockNess.