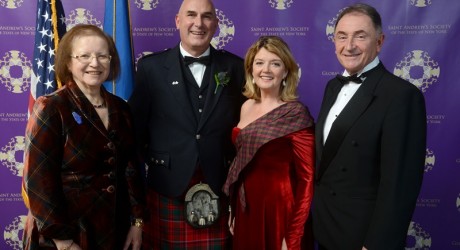 FOUR Scots who have been successful on the global business, science and arts stages were honoured at a gala dinner in New York last night (Thursday October 1).

Professor Sir Jim McDonald, principal and vice-chancellor of the University of Strathclyde, received the Entrepreneurial Leadership Award in Science and Technology.

The gala co-chairs are:-

In addition to raising funds for the St Andrews Society of the State of New York, proceeds from the gala will go to New York-Presbyterian Hospital and Yorkhill Children’s Charity which sits firmly at the heart of the Royal Hospital for Children in Glasgow.

Society president, Thomas D. Halket, said: “This dinner greatly furthers the Society in the fulfilment of our charitable purposes.

“Not only are we privileged to honour four great individuals, who exemplify all the best of Scotland, we are also pleased that it enables us to continue our support of two major medical institutions that provide the highest care and services to children of the United States and Scotland.”

Gala Committee chair, James Heggie lll, said: “This is the second such Global Awards Gala and it is now the major event for the Scottish communities in the USA. The fact that we can not only honour great Scots and Scots Americans but also support two world-class medical centres makes our endeavours even more rewarding.”

On November 19, 1756, a small group of native-born Scots and Scottish Americans met in lower Manhattan to form what is now the oldest established charitable organisation in the Empire State — Saint Andrew’s Society of the State of New York.

The Society has grown considerably over the last two-and-one-half centuries from those few Colonial gentlemen to over 600 men and women of Scottish blood, residing in all regions of the tri-state area and beyond.

The original charity ‘box’ of the Scots Society of New York, the Society’s predecessor founded in 1744, has grown through the generosity of our membership and the acumen of the Investments Committee into several substantial funds that allow the Society to fulfil its charitable purpose in ways that would make its founders most proud. Today, the Society continues to be a port of call for those Scots who have come to America and are in need of support and financial assistance.

The St. Andrew’s Society of the State of New York has provided over 150 scholarships to promote cultural interchange and goodwill between Scotland and the United States since 1956.