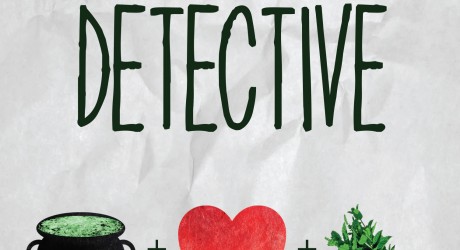 A DEBUT novel by a former Scottish newspaper journalist who also served in the Security Service is being published this week by Ringwood Publishing, Glasgow.

The Herbal Detective by first-time author, Charles Gray, is the comic story of an eccentric herbalist who sets out to discover if her husband is having an affair and to solve a murder – before she becomes the next victim.

The book is available from the publisher, Ringwood Publishing, online from Amazon from Thursday 15th October and available at leading bookshops.

Charles Gray, who was a newspaper journalist in Glasgow and London, now works in PR and lives in East Lothian. He is married with two children.

Ringwood Publishing is a small independent Scottish publisher, based in Glasgow, dedicated to publishing quality works of Scottish fiction and non-fiction.

Rosie McLeod, pub proprietor and a gifted herbalist of some renown, is 39 and holding, but only just.

The talons of her 40th birthday are in her back and her bloody, bloody husband hasn’t laid a lustful hand on her for months.

Rosie sets out to discover, using only the deductive powers of plants and herbs, if her husband is having an affair and to solve a murder – before she becomes the next victim.

She has the fortune, or misfortune, to live in one of Scotland’s most famous places – the East Lothian village of Holy Cross, which takes its name from the legendary Glastonbury Cross that was spirited away – and subsequently lost – when Henry VIII purged the English monasteries.

The cross of pale Welsh gold, reputedly buried within the village, had, at its centre, a fragment of emerald from the Holy Grail.

The story is, of course, complete baloney.

But the association with the Holy Grail means that the village is as well-known around the world as Edinburgh Castle, haggis or Loch Ness.

It has been described as ‘the heartbeat of Scotland’ and is a major tourist destination.

However, a sighting of a large, black cat by the local Church of Scotland minister sets off a chain of events that lead back 20 years and, although the villagers are blissfully unaware of it, to a woman’s murder.

The black cat had last been sighted near the village some two decades before, and the minister’s predecessor was sure that it had triggered something evil.

The villagers, of course, think otherwise.

Nothing ever happens in Holy Cross.

MEDIA RELEASE issued by Charlie Laidlaw. You too can post your story ideas for journalists (aka press or media releases), on allmediascotland.com. Email here for more information.