Media Release: Children’s Classic Concerts and the RSNO present a monster opening to their new season of family concerts 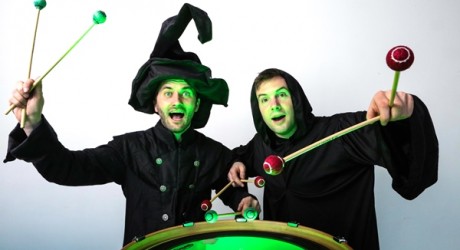 CHILDREN’S Classic Concerts’ devilish percussionist presenters, Owen and Olly, will be putting their magical musical powers to good use this Halloween and inviting the audience (and orchestra!) to come dressed in their freaky finest for their latest spell-binding showstopper.

The stages of the Glasgow Royal Concert Hall and the Usher Hall, Edinburgh will be transformed into ghoulish grottos as the RSNO and RSNO Junior Chorus perform a spine-tingling selection of spectacular classics at the latest offering in this popular series of family concerts.

“If this concert doesn’t get the audience in the mood for trick or treating, nothing will!

“We’ve got magic spells from the world’s most famous wizard, Harry Potter, a premiere of the Gruffalo Song by Julia Donaldson, which has been orchestrated specially for our concerts, and we’ll be playing spot the gnome with the orchestra as they perform Gnomus from Mussorgsky’s Pictures at an Exhibition.”

Among the other musical treats on offer will be a specially commissioned Magic and Monsters Medley which will feature Owen and Olly on solo percussion, and two spookily Scottish songs - Kelpie and Loch Ness Monster – written by Tom Cunningham and sung by the magnificent RSNO Junior Chorus.

“We are particularly looking forward to dusting off our sorcerer’s hats and casting some spells of our own on the audience and orchestra to Ponchielli’s Dance of the Hours and tackling Robert Wendel’s Headless Horseman.

“But the highlight of the concert is likely to be a performance of Savourna Stevenson’s beautifully bewitching ‘Misterstourworm and the Kelpie’s Gift’ which tells the story of a young boy’s magical quest to defeat the terrible sea monster, Misterstourworm, which will be narrated by actor (and former star of CBBC’s Raven), James Mackenzie.”

The musicians of the RSNO and their conductor, Jean-Claude Picard, will not only be providing just the right atmosphere with some superbly scary playing, but they will also be getting into the spirit of the season with some weird and wonderful costumes.

And the little monsters in the audience are also invited to come along in fancy dress, with a trolley dash in a toy shop offered as the star prize for the best costume of the weekend courtesy of sponsor A1 Toys.

Don’t miss the fun and excitement of this perfect introduction to classical music for children aged four to 12 and their families.

Children’s Classic Concerts’ Magic and Monsters will appear at the Glasgow Royal Concert Hall on Saturday 31 October at 3.00pm and at the Usher Hall, Edinburgh on Sunday 1 November, also at 3.00pm.

For more information, go to www.childrensclassicconcerts.co.uk.

Supported by Creative Scotland, La Bonne Auberge and A1 Toys.