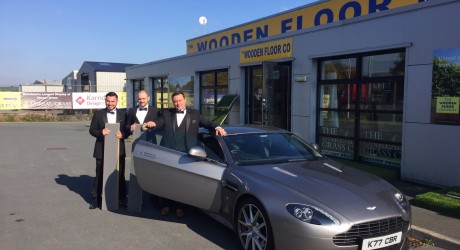 A SCOTTISH firm has furnished the set of James Bond’s latest silver screen appearance in Spectre.

The Wooden Floor Store secured a £30,000 contract to supply flooring to London’s Pinewood Studios for the new 007 film.

The 2,000sq m of grey laminate wooden panels featured in a scene set in a luxury Austrian hotel.

It is understood that director, Sam Mendes, personally selected the flooring from a range of samples supplied by the business, ordering 12 pallets.

Richard Snape, co-founder and director of The Wooden Floor Store, said: “Initial contact was made through our online business. It wasn’t clear at first what the flooring was for, as it was a bit of an unusual request.

“We found out about 18 months ago who we were dealing with. Originally, we weren’t sure whether or not it was a prank. It was incredibly exciting when we knew it was actually real.

“Most of our communication was done online, but we went down to Pinewood Studios in London to seal the deal.

“We got to see some the sets, which were incredible. No details were missed and they were kitted out with high-quality materials including high-gloss marbles.”

Richard’s business partner and fellow co-founder, Ross Nicholl, explained what the deal means to the company.

He said: “Landing a client of this size and stature has been incredible. Since supplying the boards for Daniel Craig and his co-stars to tread, we’ve had a number of follow-up inquiries.

“It’s not every day that you get an opportunity like this.

“We booked out an entire cinema screening and took around 200 of our friends, family and customers.

“Since Richard and I had seen the set, we knew which scenes our products featured in.

“I am very proud that we could play a small part in such a prestigious film.“

The latest instalment of the Bond franchise has been lauded by critics, who have praised the style of the actors and the luxurious sets.

With premises in Glasgow, Paisley and Edinburgh, The Wooden Floor Store was founded in 2000 by Richard Snape and Ross Nicholl. The pair, fresh from university, started with limited funds and have since grown the business into a key player in Scotland, serving both the retail and trade markets.

The Wooden Floor Store has locations in Glasgow, Edinburgh, Paisley, Belfast and Lisburn. The company recently won the title of ‘Scotland’s best flooring company’ at the Scottish Home Improvement Awards 2015.