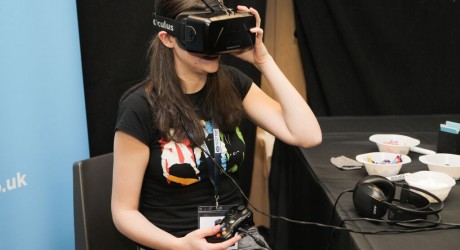 It is one of the highlights of Lochaber Ideas Week, a week of business development workshops, entrepreneurial competitions, open discussions, inspirational talks and networking opportunities that celebrate the Lochaber region.

This special one off event will give Lochaber residents a rare opportunity to test the most innovative and creative prototype video games, network with the talented young guns of Scotland’s thriving gaming industry and try out some of the most cutting-edge film equipment used in the creative industries; all on their own doorstep.

Some of the most exciting young games designers and developers from Scotland’s up-and-coming independent studios, together with other businesses involved in the creative industries, will attend XpoNorth: Games Playground and Hands-on Camera Workshop.

At the Games Playground, presented by XpoNorth, Scotland’s leading creative industries festival, and screen and broadcast support body, ScreenHI, would-be developers will be able to network with a broad cross-section of designers, writers and producers, including a representative from national video games body, the Scottish Games Network.

These industry leaders will be on hand to give advice on what it takes to work in the gaming industry, a competitive business sector that is growing exponentially in Scotland; as well as receiving career guidance in the creative industries.

As well as offering the chance to surf in a virtual gaming playground and test out video games which are still in development, there will be hands-on sessions to give those attending a taste of the skills needed and equipment used in making professionally-produced video games and quality screen and broadcast output.

In the Hands-on Camera Workshop, run by Eileen Byrne of Visual Impact Scotland, budding Spielbergs will be introduced to cutting-edge camera and dolly equipment. They will be able to try out a range from GoPros and BlackMagic to the latest Sony high end film cameras.

“We are delighted to be working with Lochaber Ideas Week, the Scottish Games Network and Visual Impact in bringing the Games Playground and Hands-on Camera Workshop to Fort William.

“As a native of Lochaber, I’m particularly keen to pursue and support creative opportunities for young people in the area. We definitely want to give them all the assistance we can in following a career in Scotland’s booming video gaming industry.

“These new independent studios have proved that anything is possible if it’s backed up with determination, focus and practical support.

“The same applies to the Camera Workshop. Eileen Byrne, who grew up in Garvan, Locheilside, and her team from Visual Impact Scotland work at the sharp end of the screen and broadcast business.

“They will be able to offer an overview to anyone with an interest in how it all works when a production team for a television drama series, a film or a commercial is looking for the best equipment on the market.”

For the full programme and more information on Lochaber Ideas Week 2015: http://www.lochaberchamber.co.uk/partners/lochaber-ideas-week-2015/

For further information, images or to arrange interviews please contact:

The games developers attending the XpoNorth: Games Playground include:

Lochaber Chamber of Commerce have recently announced the programme for Lochaber Ideas Week 2015, a week of business development workshops, entrepreneurial competitions, open discussions, inspirational talks and networking opportunities that celebrate business, education and community in the Lochaber region, from Monday 16 to Saturday 21 November.

The annual Lochaber Ideas Week provides a unique platform of opportunities in which to provoke new ideas, stimulate fresh initiatives and ventures and inspire action.

Its goal is to create new connections and points of collaboration in which to to build a diverse community of practitioners who strive to develop new ways of activating, interacting, collaborating and marketing Lochaber, the ‘Outdoor Capital of the UK’, as a great place in which to live, work, study and do business. The event also encourages new business start-ups and assists existing businesses to improve their leadership and sustainability.

Lochaber Chamber of Commerce, fully affiliated to Scottish Chambers of Commerce, who stage the Lochaber Ideas Week, actively promotes collaboration among the business community – both large and small.  It serves as a voice for Lochaber business on important issues locally and nationally.

They have something quite unique in Chamber organisations in that they also serve as a destination organisation to promote the ‘Outdoor Capital of the UK’ (OCUK). Under the OCUK brand, they publicise, sponsor and promote tourism in Lochaber. They do this via www.outdoorcapital.co.uk and through a range of collaborative marketing initiatives and activities.

The Chamber and OCUK promote Fort William and Lochaber as the best place in the UK for everyone to experience the outdoors and to do business; with a view to developing local jobs and wealth and encouraging sustainable economic growth.

The screen and broadcasting wing of the XpoNorth creative industries network is called ScreenHI and is headed up by Amanda Millen, who is also director of XpoNorth. ScreenHI is the Screen and Broadcast Industry Network for the Highlands and Islands and has been operating for five years. It offers experiences, job opportunities and industry networking to screen and broadcast businesses in the Highlands & Islands.