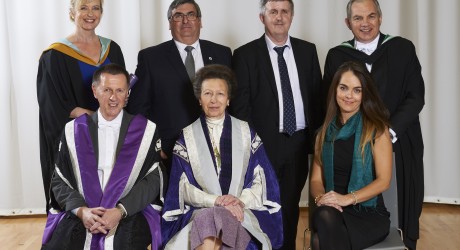 OVER 200 invited guests gathered at the new Inverness College UHI building today (Tuesday 17 November) for the University of the Highlands and Islands Foundation Day.

The university holds the event annually to celebrate the endeavours and successes of its students, staff and supporters.

Her Royal Highness The Princess Royal, chancellor of the university, presided over the occasion and presented awards and fellowships.

Born in Morar, Inverness-shire, Carol has appeared on all BBC television, radio and social media platforms. She currently presents the weather on BBC One’s Breakfast programme on weekday mornings, the Chris Evans breakfast radio show and the Victoria Derbyshire show.

John Duncan OBE, a consultant surgeon at Raigmore Hospital and vice-president of the Royal College of Surgeons of Edinburgh, was also made an Honorary Fellow and retired dean, Ian Leslie, was awarded a Chancellor’s Medal for his contribution to the university.

Leanne Demay (36) from Spey Bay in Moray was named as the 2015 University of the Highlands and Islands Student of the Year at the ceremony. She was praised for her positive attitude and academic achievement, securing a first-class honours degree in archaeology at Moray College UHI while bringing up a family, working at Elgin Museum and volunteering on excavations around the Highlands and Islands.

The event concluded with a guest lecture by the award-winning writer and director, Douglas Mackinnon. Born and brought up on Skye, Douglas is known for his work on television series such as Doctor Who, Outlander and Sherlock and on the 2006 feature film, The Flying Scotsman.

Carol Kirkwood said: “I am thrilled and honoured to receive an honorary fellowship of such a prestigious university and one so very close to my heart. No matter where I travel in life, I will always be a Highland girl through and through. It was an amazing day and so encouraging to see such enthusiasm from those students who will be shaping our future. And the icing on the cake was to be presented this wonderful accolade by HRH The Princess Royal. Thank you so much.”

Leanne said: “The unique learning experience offered by the University of the Highlands and Islands enabled me to study a subject which would normally have been out of my reach due to work and family commitments.

“The co-operation between partnering colleges gives huge opportunities to remote students and the video conferencing, online chats and Facebook pages create a special support community between lecturers and students.

“I would like to say a huge thank you to my lecturers, friends and family for the amazing support they offered me throughout my studies. It was hard work, but I loved every minute and I am absolutely delighted and humbled to receive the Student of the Year award.”

Professor Clive Mulholland, principal and vice-chancellor of the university, said: “Foundation Day is one of the highlights of our university calendar. It’s an opportunity for members of our university community to join together to celebrate success and thank our supporters.

“This year’s Foundation Day has been another great occasion. We were delighted that our Chancellor, Her Royal Highness The Princess Royal, presided over the ceremony and that the eminent writer and director Douglas Mackinnon gave us such a fascinating insight into his career.

“Thanks to everyone who came and congratulations to our newest honorary fellows and our award winners.”

Earlier in the day, Her Royal Highness The Princess Royal, officially opened Inverness College UHI’s new £50 million building. She toured the facility, spoke to students and staff and unveiled a plaque to mark the occasion.

MEDIA RELEASE issued by UHI. You too can post media releases (aka press releases) on allmediascotland.com. Email here for more information.