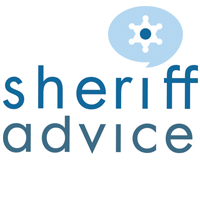 SCOTS struggling with mounting debts are to get a new, free advisory service.

Sheriff Advice, which launches this month, aims to free Scottish debtors from the threat of court action and insolvency by pairing them with the best possible debt solutions.

Begins a spokesperson: “With recent figures from the Accountant in Bankruptcy (AiB) showing that personal insolvencies rose by 38.9 per cent between July and September, there is widespread concern in Scotland that not enough is being done to tackle the country’s personal debt crisis.

“The majority of cases dealt with by Sheriff Advice concern Council Tax arrears. Earlier this year, Citizens Advice reported – here – that over 12 per cent of people seeking their help cited Council Tax arrears as the primary cause of their debt worries.

“These rising debts not only damage credit scores –– many debtors reporting feeling ‘trapped’ and ‘out of control’ of their finances.”

Sheriff Advice’s founder, Dan Wardrope, explains: “It’s not necessarily the debts themselves that cause stress, but how the local councils chose to recover the debts.

“Once the Sheriff Officers get involved and start knocking on doors demanding payments, the pressure becomes too much to bear for many people.

“Not enough being done to counter spiralling personal debts.

“Despite legislation put in place by the Scottish Parliament to protect debtors, many Scots are suffering ever-worsening debts.”

Dan Wardrope believes that much of the problem is due to a lack of public awareness.

“One of the main problems we’ve seen is that, even though there are plenty of proven ways to get out of debt, most people are not aware of the steps you can take to stay in control of their financial situation,” said Mr Wardrope.

“When it comes to sheriff officers, they seem threatening because they present themselves as being more powerful than you. But realistically, their powers are very limited.”

Mr Wardrope also identifies the stigma surrounding debt as a reason why many people miss out on proper advice.

He adds: “What people need to realise is that debt is as inevitable as death and taxes nowadays.

“Everyone is in debt to some degree, and there’s no shame in asking professionals to help you get out of it.”

Sheriff Advice provides free advice on dealing with house visits from Sheriff Officers, Council Tax arrears and other debt-related issues. The advisory service is entirely free, and where appropriate debtors will be matched with a personalised debt solution, such as a Trust Deed or a Debt Arrangement Scheme.

To get free advice, concerned debtors can request a call back from our independent team of debt advisers who specialise in Sheriff Officers and Council Tax arrears.

Debt Arrangement Schemes (DAS) were introduced by the Scottish Government in 2004 and are supposed to limit the power of Sheriff Officers.

MEDIA RELEASE issued by Sheriff Advice. You too can post media releases (aka press releases) on allmediascotland.com. Email here for more information.