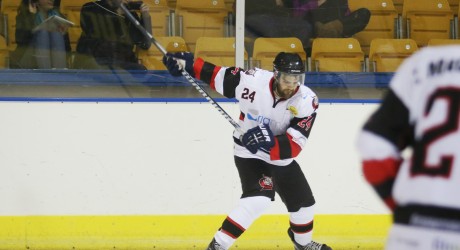 The Dunfermline-based company’s relationship with Aberdeen Lynx, the area’s second most-supported team behind Aberdeen FC, began in 2014, and this will be the second season they have sponsored defender, Scott Chalmers.

Scott, who is originally from Lochgelly, Fife, has played for the Aberdeen Lynx for three seasons, and has been selected to play for Scotland’s youth teams on a number of occasions following his success at the team.

Scott, who has also played for the Dundee Stars and Dundee Comets works full-time in Fife as an electrician for Fife Council and travels regularly to attend training and games across Scotland.

Scott, defender for the Aberdeen Lynx, said: “I am extremely grateful to Team Challenge Company for choosing to support my development as an ice hockey player.

“I feel extremely lucky to have gained vital funding for a sport I love, and this means that I can concentrate on developing my skills on and off the ice without worrying about sponsorship, I am heavily involved in coaching the junior players so this support also boosts their confidence in the sport too.”

Co-director of Team Challenge Company, Stephen Hazley, said “Scott is an incredibly talented player who is passionate about the game.

“He displays all the qualities we at Team Challenge Company believe in and we are proud to be able to support his development. Watching Aberdeen Lynx Hockey play is a thrilling experience and we shall be cheering Scott and the rest of the team on throughout the season.”

Issued on behalf of Team Challenge Company by The BIG Partnership. For more information please contact: