Media Release: Margaret serves up a recipe for success 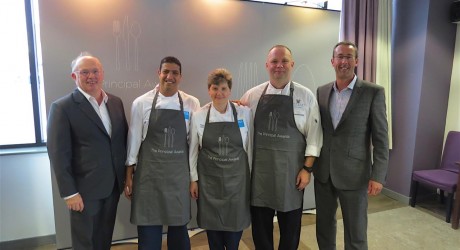 A CARE home chef who made her own recipe book after word spread across Scotland about her impressive culinary skills has won a coveted Chef of the Year Award.

Margaret McFlynn, chef manager at Bupa’s Mugdock House care home in Bearsden, Glasgow, won the highly sought-after title at Bupa’s annual Chef of the Year Awards, after being picked for the top spot out of an impressive 300 initial nominations.

The tense Masterchef-style event is open to chefs from Bupa care homes across the UK and saw Margaret triumph over the competition, first beating six savvy chefs in the Scottish final, before being crowned champion at the overall final in Leeds.

Margaret, who has worked with Bupa for 17 years, took first place after wowing the judging panel with her Scottish-themed menu of haggis-stuffed chicken in whisky sauce, accompanied by a strawberry shortbread stack for dessert. The menu had to be presented for both a normal and fork-mashable diet.

One of the key reasons for Margaret’s nomination to take part in the culinary challenge was her commitment to creating delicious recipes and baking sweet treats for residents and staff at Mugdock House.

Every morning, Margaret bakes different treats from scratch for the residents and their families to enjoy throughout the home. While the residents love to enjoy all of Margaret’s baking, the big favourite is her shortbread, which was her main influence for displaying this recipe for the event.

After being inundated with requests from other Bupa homes in Scotland for the tips and tricks behind her popular baked goods, Margaret developed an eCook book, which includes recipes for cream scones, ginger biscuits, brandy baskets, lemon meringue and vanilla cheesecake. This is something she has shared with all the nearby homes.

Margaret said: “Taking part in the Chef of the Year Awards was completely nerve-racking and quite tough emotionally.

“I love cooking and baking for everyone at Mugdock House, and we regularly run cookery sessions using my recipes – but this was something else entirely and the pressure was really on. I honestly never thought I’d come away with the Bupa Chef of the Year title – my hands were shaking the whole way through!

“The residents love the recipes I come up with, and if anyone has a particular favourite, I’ll teach myself how to make it.

“One of my highlights from my 17 years with Bupa is definitely creating my eCook book last year. It was very flattering to have other Bupa chefs asking for my recipes when word spread.

“The book is also a great way to train up new staff who will be able to continue to provide these little treats to brighten up the residents’ days.”

Resident, Tibbie Hutchison, said she is a big fan of Margaret’s work.

She said: “I looked around a range of care homes before settling at Mugdock House Care Home and I’m so glad I did as I love living here.

“I really enjoy Margaret’s homemade shortbread, but as I have a savoury tongue, I particularly love the cheese scones.”

Fellow resident, Isabella Lewis, added: “Margaret made my birthday extra special by making a range of delicious cakes. My favourites are the shortbread and strawberry tarts.”

The final of the annual Bupa Chef of the Year Awards were held at Leeds City College, and saw Margaret McFlynn competing against six other regional Bupa chefs.

Margaret’s win will be commemorated with a celebratory dinner at Michelin-starred Le Gavrouche, Michel Roux Jr’s restaurant in London, at the end of this month.