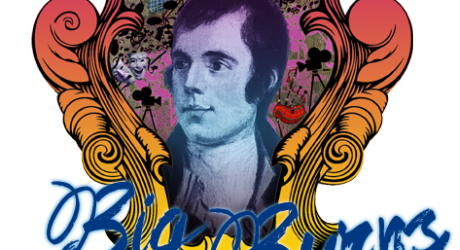 EDEN Court CREATIVE are delighted to have been awarded funding to participate in the Scotland’s Winter Festivals 2015/2016 programme.

For a fourth year, Eden Court CREATIVE will work with young people and artists from across the Highlands to deliver an event to celebrate Burns Night.

The Big Burns Stramash will take place on Saturday 23 January at Eden Court, and there will be a range of different Burns themed events throughout the day for families to get involved in.

The event will be made up of workshops and film screenings, a lantern procession and some outdoor performance too.

The day’s events will be rounded off with not one but two Burns Ceilidhs.

From 5.30pm, The Wee Burns Ceilidh is perfect for families with wee ones to come and dance with some special guests. Then, later on in the evening, the Ceilidh Commandos – Gary Innes (Manran), Ewen Henderson (Manran), Alec Dalglish (Skerryvore) and Martin O’Neill (Treacherous Orchestra) – will host The Big Burns Ceilidh for ages 14+.

For the first time, Eden Court have incorporated a schools project into the Burns Night celebrations.

The Stramash-up! project invited ten classes from Primary 4 and 5 to take part in an unique Tam O’Shanter film mash-up.

Each class worked with our drama team on a section of the poem, and transformed it into a creative film. Classes from Cradlehall, Smithton, Milton of Leys, Merkinch, Dornoch, Kilchumein, Millbank Primaries and Bun-Sgoil Ghàidhlig Inbhir Nis took part.

The film will be premiered at the cinema in Eden Court on 23 January.

“Burns Night is the perfect opportunity to celebrate our Scottish identity including our creativity, pride and confidence. Robert Burns encapsulates this and I encourage friends, family and loved ones across the Highlands to come together to honour this great Scot.”

The Big Burns Stramash is part of the Scottish Government’s Winter Festivals programme, which has been provided with a record £390,000 of funding to support 21 key cultural events in 15 local authority areas across the country. Events will run across Scotland from the lead up to St Andrew’s Day, through Hogmanay, to Burns Night, showcasing Scotland as a modern and creative nation with a rich heritage.

“I am delighted that the Big Burns Stramash is being held here in Inverness and I am sure it will attract families from around the area. With workshops, film screenings, a lantern procession and two ceilidhs, it is the perfect choice for an event that sets the stage for the Year of Innovation, Architecture and Design 2016.

“2016 will be a year to remember in Scotland – from textiles to technology, architecture to fashion and design, events across the country will shine the spotlight on our greatest assets and icons, as well as our hidden gems. This is tourism’s opportunity to showcase Scotland’s traditional and contemporary culture and cutting-edge design to the world.”

“This year we are going for even more Burns Night fun than before, and we’ve started early! Our primary schools project; Stramash-up! began earlier this month. We are delighted to have been able to involve many primary school children in this part of Big Burns Stramash.

Tickets are available from the Eden Court box office by calling 01463 234 234 or online at www.eden-court.co.uk

MEDIA RELEASE issued by Eden Court. You too can post media releases (aka press releases) on allmediascotland.com. Email here for more information.