Media Release: Pupils invited to get creative with robot competition 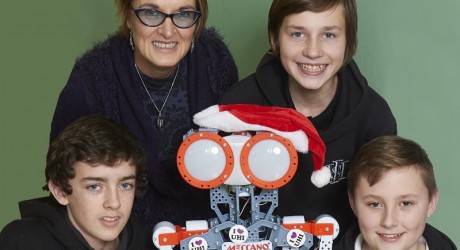 LOCAL pupils are being given the chance to win a robot for their school with the launch of a new competition.

The University of the Highlands and Islands is inviting entries for its Christmas Robot Competition.

Each secondary school in the Highlands and Islands region can enter a team of up to five S2 and S3 pupils. The teams will be asked to come up with a pitch of up to eight minutes about why their school should win a robot, explaining how it would be used to help pupils learn about science, technology, engineering or maths.

The teams judged to have the most convincing and creative pitches will win Meccano Meccanoid robots. The robots can speak, move, record sounds, respond to voice commands and connect to smart devices. There is also a range of smaller prizes, such as robotic arms, for the runners-up.

Schools are being asked to register for the competition by Friday 22 January. Judging will take place in March and the winning teams will be announced at the start of the 2016 Inverness Science Festival in May.

The Christmas Robot Competition is being organised by the University of the Highlands and Islands science, technology, engineering and maths (STEM) team.

STEM administrator, Dr Evelyn Gray, explains: “We hope a team from every secondary school in the region will enter this competition.

The Meccano Meccanoid is an exciting piece of equipment which can be used to develop many cross-curricular activities.

“Students can learn basic construction techniques and, as the robot can communicate and interact with people, it can help to develop leadership skills. In fact, the students seem to be able to communicate with the Meccanoid a lot more successfully than I do!”

School pupils at Inverness High School trialled one of the competition prizes by helping to build a Meccano Meccanoid. It took them ten hours in an after school science club over a five-week period. The pupils are now testing the robot and say they are “very proud of their achievement”.

Brian MacDonald, faculty principal teacher of maths and technology at Inverness High School, said: “The pupils thoroughly enjoyed building the robot. It was challenging, particularly in the initial phase when faced with thousands of bits and pieces, but it was good to see the team working well together and the robot taking shape.”

MEDIA RELEASE issued by UHI. You too can post media releases (aka press releases) on allmediascotland.com. Email here for more information.