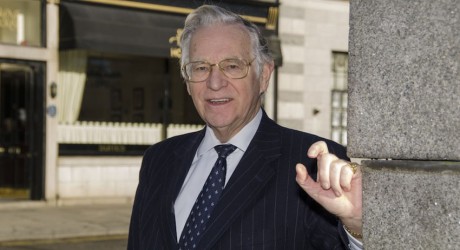 PROMINENT Aberdeen businessperson and Professor of Entrepreneurship, Charles Skene, has been inducted into the UK Healthcare Hall of Fame, in recognition of his outstanding contribution to care for the elderly.

As co-founder and developer of the Inchmarlo Care Home and Retirement village at Banchory, Aberdeenshire, Professor Skene OBE has won the award for The Most Outstanding Contributor to the Creation of Continuous Care Retirement Community Healthcare Model in the UK. He is the sole inductee into the awards’ UK hall of fame for 2015.

Speaking of his care in the community concept, Professor Skene says: “When we conceived of the idea for Inchmarlo, we revived a care model that hadn’t been seen in the UK in over a century. In the three decades since the Retirement Village was formed, the concept of independent living has become widely accepted as a compassionate, cost-effective way of ensuring a better quality of life for our ageing population.

“With one in three of children born in the UK today living to be over 100 years-old, the demand for such a care model will only increase.”

He adds: “Our facilities at Inchmarlo both in the homes on the estate and in the care home are truly world-class. People can buy a home and never use the facilities available, or they can get as involved as they wish in the many varied clubs and associations, it is all about choice.

“When health patterns change the additional care and support services enable home owners to continue living in their own homes showing considerable savings over moving into a care home. Inchmarlo Retirement Village has changed not only the way people think about care for the elderly, but how, as a society, we should manage old age itself.”

Professor Charles P Skene OBE DBA, holder of the Queen’s Award for Enterprise Promotion, Visiting Professor of Entrepreneurship at Robert Gordon University and a Price Babson Fellow. He is an entrepreneur and a lifelong advocate of improving the economy of Scotland by encouraging enterprise education in young people. He was recognised as the first person in the UK to introduce such an award for all primary and secondary schools in Scotland when he introduced the Skene Young Entrepreneurs’ Award in 1986, following his chairing of Industry Year Grampian.

The awards recognised successful mini and young enterprises in five regions by awarding cash and other prizes. He ran the awards for 18 years until they were taken over by the Scottish Government and amalgamated into the Scottish Education Awards.

He was recognised as the first person to introduce the concept of one-to-three bedroom serviced apartments in the UK available on a per night basis. He pioneered the concept of a retirement village with continuing care at Inchmarlo on Royal Deeside. The purpose of which was to help people to continue to live in their own homes with assisted living services.