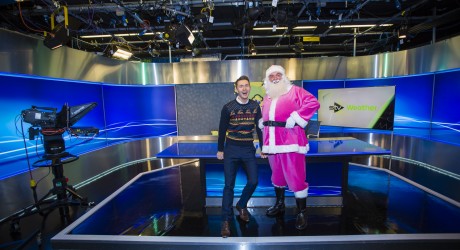 Glasgow’s Santa gets put through his weather forecasting paces by STV favourite, Sean Batty, during trip to broadcaster

GLASGOW’S favourite weatherman, Sean Batty, was on his best behaviour this week as Glasgow’s Santa swung by the STV studios to drop off gifts and put his meteorology skills to the test in a special weather report.

Before departing the city for his worldwide tour, Glasgow’s Santa, in his resplendent pink suit, was invited to Pacific Quay for an exclusive behind-the-scenes tour of the studios which also included visits to the Riverside Show and the STV sports team.

As part of the Glasgow Loves Christmas campaign, Sean showed Santa the ropes of weather forecasting, offering a number of tips before Santa’s debut in front of the green screen where he reported the weather outlook for his native Lapland.

Commenting on the visit, Sean said: “We’ve done tours before and plenty of people have tried their hand at presenting the weather, but having Santa in front of the map is certainly a first!

“He was very much a natural in front of the screen, but I think he’ll need to swot up on his weather patterns and terminology before he gets a gig on STV News!”

Glasgow’s Santa has played a key role in the Glasgow Loves Christmas campaign to promote the city’s seasonal events programme.