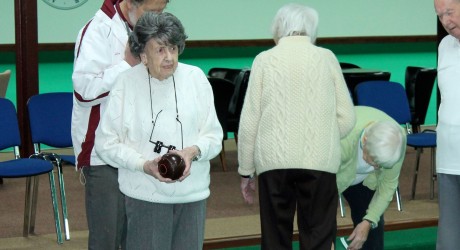 North East Sensory Services, which has offices in Aberdeen, Elgin and Dundee, supports people who are living with a visual and/or hearing impairment.

The organisation’s Connect, Support, Inform (CIS) project provides activities for people aged 65 and over, many of who rarely leave the house.

After asking service users what activity they would like to do, many suggested bowling.

Every Friday, Frank transports people aged 65 – 95 to Summerhill in Aberdeen, to take part in a highly competitive two hour bowling session. Some members have played bowls for a long time, while others have learned to play the sport since losing their sight.

Bunty Sherriff, 89, and her friend Agnes Reid, 94, enjoy their afternoons at the bowling alley.

“I started when I retired,” says Bunty who used to work in the health sector. “I enjoy the company and also come along for the exercise.”

Great-grandmother, Agnes, has been losing her sight over the last five years due to macular degeneration. “I regularly go along to the groups at NESS as they are a great bunch of people.

“I was a bowler 18 years ago, and NESS has enabled me to go back to the sport. I am taking part in competitions which I enjoy.”

Begins a spokesperson; “Bowling by people who are blind is not just possible it is highly competitive.

“Blind bowling was first set up in 1959, when a system of bells and clapping hands were used to indicate bowl positions. Today, a ‘clock method’ is used, whereby a ‘marker’ is stationed at the jack and using a walkie talkie system, he or she will feed back to the bowler the position of the bowl.

“’Two at two’ indicates the bowler has bowled two feet from the jack at two o’clock. The players then build up a mental picture of the ‘head’ or positions of the bowls.

“A fine white string runs under the mat and fixed at both ends to help the bowler get his bearings. The Scottish Association of Blind Bowlers (SABB) has participated in the World Blind Bowling Championships all over the world, and one if its players is part of the NESS team.”

Harry Murray, 84, is a medal-winning bowler, the former British and Scottish Visually Impaired Bowling champion; Harry took part in the UK championships in 2010 and was part of the Scottish World Championship squad in 2011.

The ex RAF officer has been bowling since he retired in 1996, and lost his sight due to genetic disease retinitis pigmentosa five years ago.

Thanks to NESS Harry has learned how to use his smart phone to keep in contact with his family, including grand children and great granddaughter in Australia.

Harry said: “NESS has helped me not just keep up my bowling skills but also get greater independence.”

North East Sensory Services (NESS) promotes the needs of people with a sight or hearing loss.