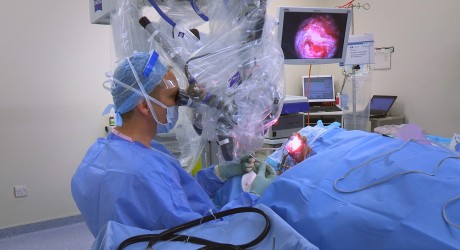 IMAGINE a world without sound, a life with profound deafness, however for some there is an alternative which can transform lives.

A new BBC ALBA documentary broadcast on New Year’s Day, titled ‘The Switch On / Cluinneam’, offers an emotional and poignant insight into at the work of the Scottish Cochlear Implant Unit at Crosshouse Hospital, Kilmarnock, as it follows five patients on their personal journeys for a procedure that presents significant risks but also unimaginable rewards.

Begins a spokesperson: “Half a million profoundly deaf people across the world have had their hearing restored thanks to cochlear implantation.

“The Scottish Cochlear Implant Unit at Crosshouse Hospital in Kilmarnock is one of the UK’s largest cochlear implant units, and the only unit of its kind in Scotland.

“Every week, twice a week, the staff at Crosshouse are witness to the extraordinary process of switch on when a patient’s processor is fitted and the implant is switched on for the first time.

“The team are keen to get the message out about what cochlear implantation can do to transform lives. 50,000 people in Scotland are deaf but only about 100 get implants a year.”

‘The Switch On / Cluinneam’ documentary follows five patients through assessment, surgery, switch on and rehabilitation.

The risks are very high – in cochlear implantation, the surgeon is working within millimetres of the brain and, what’s more, the process of implanting the electrode damages the cochlear hair cells and, as a result, while cochlear implant may give them their hearing back, it could equally take the little that’s left of it away.

Surgeon, Peter Wardrop, added: “The patient will lose any natural hearing and won’t be able to go back to hearing aids at a later date.”

* Craig (75), from Dalkeith near Edinburgh, lost his hearing progressively. He started losing his hearing in his twenties but, over the last seven years, he has been classed as profoundly deaf. As a result, he has never been able to hold a proper conversation with his grandchildren, Calum (7) and Craig (5).

* Mark (48), from Kirkintilloch, the industrial engraver and sign maker lost his hearing in a matter of months. The doctors still don’t know why. He knows that he will have to leave his job of 32 years if it doesn’t go well. Mark has been on anti-depressants since he began losing his hearing ten months ago. So will the implant save Mark’s job… and will it save is mental health?

* Rona (16), from Scalpay on Harris, went from singing in the Mod to profoundly deaf over a six-week summer holiday when she was 13. The doctors hope that her second (ear) implant will allow her to hear in noisy group situations.

* Fraser (8), from Glasgow, is one of the estimated 40 per cent of children who are born deaf who also have additional needs. Fraser’s mum, Erica, fought hard to get her son implanted: as the team weren’t certain if Fraser would have the capacity to interpret the sounds he would hear with an implant. A year and a half on, Fraser is being assessed by a Crosshouse Rehabilitation Specialist for speech therapy. The implant has been a huge success for Fraser who is making great progress with his language development.

Satisfaction rates for cochlear implants are high, with 95 per cent of patients reporting that they are glad they went through with it

However, the journey isn’t easy and not all switch ons are as positive an experience. For those prepared to take the risk and endure the rehabilitation required, implants, if successful, can transform lives.

Produced for BBC ALBA by Matchlight Ltd and Bees Nees Media ‘The Switch On / Cluinneam’ will be broadcast on New Year’s Day, 1st January at 9pm.