Media Release: It will be all ‘Smillies’ as the World Scotch Pie Champion 2016 is announced on 13th January 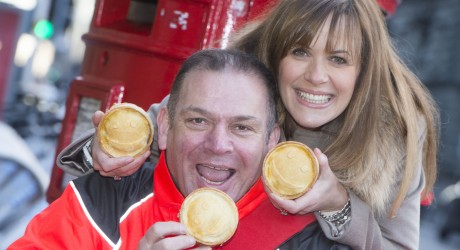 PRESENTER and entrepreneur, Carol Smillie, has confirmed that she will be presenting the 16th World Scotch Pie Champion with their prize – at the Westerwood Hotel, 1 St Andrews Drive, Cumbernauld, G68 0EW from 2.00pm on Wednesday 13th January 2016.

Press are invited to join Carol from 2.00pm with the winner expected to be announced at 3.00pm followed by interviews and a photo call at 3.30pm.

Carol, who supported the “warm and tasty, wrapped in pastry” Blue Monday campaign in Scotland last year, is delighted to be announcing the winner of the World Scotch Pie Championships 2016:

She said: “What better to cheer you up on a dreary day than a piping hot pie?

“It has become an iconic food in Scotland and you can’t beat the combination of golden pastry and tasty meat filling for a treat so it’s a real honour to be announcing who makes the best Scotch Pie in the land.”

Alan Clarke, chief executive of Scottish Bakers, which manages the competition on behalf of the Scotch Pie Club, said: “I am delighted with the quantity and quality of entries this year and I cannot wait to see the looks on the faces of our worthy winners.

“This competition really is about saluting the best in the land and we will certainly see some of the best artisan bakery products recognised when the winners are announced.”

The competition gives butchers and bakers across Scotland the opportunity to become recognised as producing the highest quality products around the globe with awards given to those producing the best products in each category.

The winner of the Scotch Pie category will be declared as the WORLD CHAMPION.

Alan continues: “The competition, which has run for 16 years, aims to highlight that bakers and butchers create high quality artisan pastry products.

“Recognising the ‘great and the good’ in this way rewards excellence and raises the bar in the industry.”